You can now watch the recordings for the Women Leadership Panel and Meet Your Mind online!
Watch 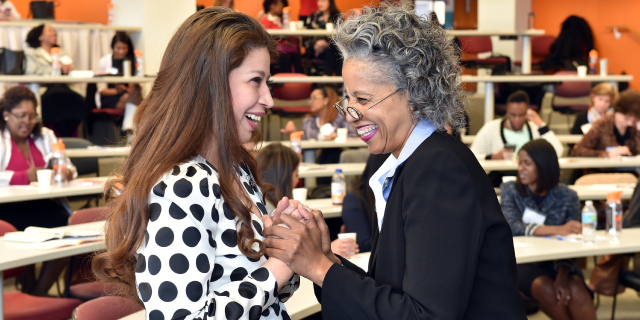 All sessions in the series are recorded and available on our channel.

**All sessions are hosted via Zoom on zoom.edu urls.**

Attendees using a government/work Zoom account that have restrictions to only access "zoom.gov" URLs, please plan to use a personal device, a personal Zoom account, or dial in via phone.

In honor of the many women who have dedicated their lives and work to government, public service, and leadership, Key Executive Leadership Programs hosts events to highlight the importance of women, inclusion, and unveiling unconscious bias. Started in 2018, the Key Executive Women in Leadership Forum has become one of Key's most exciting annual events.

You can read about all past events below or check out this article about the first ever Key Executive Women in Leadership Forum. 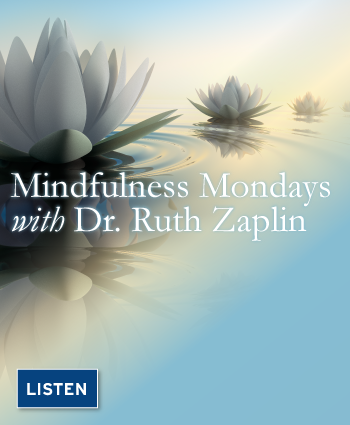 Join us as we kick off the annual Key Executive Women in Leadership Forum with our first session focusing on navigating successes and failures, self-care and self-compassion, and staying true to yourself, your core values, and your missions.

The Executive Director of Applied Mindfulness Training, Carol draws on more than forty years experience teaching meditation and other contemplative disciplines to explain how learning to direct our attention enables us to detect inner patterns and how the resulting clarity helps us more skillfully deliver benefit in each moment.

Join us as we kick off the annual Key Executive Women in Leadership Forum with our first session focusing on navigating successes and failures, self-care and self-compassion, and staying true to yourself, your core values, and your missions.

Key Professor, Dr. Ruth Zaplin, will interview Carol Hyman about her book, Meeting Your Mind: Harnessing the World’s Greatest Resource. The Executive Director of Applied Mindfulness Training, Carol draws on more than forty years experience teaching meditation and other contemplative disciplines to explain how learning to direct our attention enables us to detect inner patterns and how the resulting clarity helps us more skillfully deliver benefit in each moment.

In KPMG’s 2020 Women's Leadership Summit Report, 75% of women executives surveyed admitted to imposter feelings during their careers. Reasons for flickering or conditional confidence in women are complex.  Some research reveals that cultural and societal expectations of gender roles can create the emergence of a “psychological glass ceiling” for women. Women can internalize gender stereotypes and experience internal crises of confidence about their abilities.

In this workshop, Janet Ioli will discuss some of the complexities surrounding women leaders and confidence, feelings of inadequacy and illegitimacy, and the imposter syndrome. She’ll provide self-reflection exercises and practical tips to combat negative thought patterns to create a grounded and confident leadership presence.

Check out the session descriptions for the 2021 Annual Women in Leadership Forum! Some of the information here is abbreviated.

The 2020 Key Executive Women in Leadership Forum felt a little different. Although the crowd was smaller and the soon to come public health crisis looming, the energy and enthusiasm was as present as ever. Check out the session descriptions for the 2020 Annual Women in Leadership Forum! Some of the information here is abbreviated. For full session descriptions and speaker bios, please see the document linked below available for download.
Session Descriptions
Speaker Bios

In August 1996, Laura Liswood co-founded the Council of Women World Leaders with President Vigdís Finnbogadóttir of Iceland located in Washington, DC at the United Nations Foundation.  Ms. Liswood is the Secretary General of the Council, which is composed of women presidents, prime ministers, and heads of government.

In 2001, Liswood was also named Managing Director, Global Leadership and Diversity for Goldman Sachs.  Working on issues of globalization, leadership and workforce diversity, she was a Senior Advisor to the firm until 2016.

From 1992 to 1996, Liswood interviewed 15 current and former women presidents and prime ministers, which is chronicled in her book and video documentary, Women World Leaders.

Liswood’s professional experience includes consulting for the Boston Consulting Group, CEO/President of the American Society for Training and Development, executive positions at TWA and Westinghouse.  She was appointed by the US Secretary of Defense for a three year term on the Defense Advisory Committee on Women in the Services (DACOWITS). After the events of September 11, 2001, she became a reserve police officer for the Washington, DC Metropolitan Police Department and retired as a sergeant in 2014. She is on the board of directors of the Smithsonian Friends of the National Zoo.

Liswood holds an M.B.A. from Harvard Business School and a B.A. from California State University, San Diego.  She holds a J.D. degree from the University of California, Davis, School of Law, and is admitted to practice law in California and Massachusetts.

Liswood is the author of three books: The Loudest Duck: Moving Beyond Diversity, Women World Leaders, and Serving Them Right.

In today’s highly interconnected and global world, negotiations can be more complex, ambiguous and fast paced than ever. Professionals encounter opportunities for negotiating more often than they realize. In this session, Sirin Koprucu will discuss the WHO and WHY, the psychological and cultural underpinnings of behavior and strategy in negotiation.

Participants will first learn a framework to describe themselves and counterparts based on five human conditions that when integrated in equilibrium can result in identifying opportunities for mutual gains and collaboration through deep awareness. In the second part of the session, participants will examine HOW they behave in limited resource and uncertain negotiation situations despite all intentions to cooperate. They will leave the session with a preparation guide they can utilize to track the WHO, WHAT, WHY, WHAT IF and HOW components when leading their future negotiations with clarity, confidence, energy and creativity.

With 2020 sure to be a year full of change and transformation, this year’s forum will focus on looking toward the future of excellence, celebrating 100 years of women’s suffrage, where we are and where we could be.

Featuring extraordinary leaders and dedicated public servants, the panelist will reflect on strides made toward equity in federal government and examine next steps.  As leaders in traditionally male-dominated fields, panelists will discuss trends in their respective industries, share personal and professional experiences in the public services and identify trends.

The panel will conclude with Q&A.

Angela Tennison grew up in SC and through a mix of hard work and flukes of good fortune, ended up as a manager of the Executive Residence in the Obama White House.

Along the way, she had front row opportunities to witness legacy in action and she became intrigued. What does legacy mean? Is it something we leave behind at the end of our life? Or is it something we do on a daily basis based on how we show up?

In this thought-provoking presentation, Angela shares her insights that legacy is not something you think about in the late stages of life, it’s something we all have a responsibility to create NOW, not someday.

As a result of this talk, you’ll gain clarity on how you can make more of a difference, how you can live in integrity on a daily basis that positively influences everyone around you, and how you can behave in alignment with your values so the people around you are inspired to do the same. That’s what it means to lead and leave a legacy. And anyone can do it.

Resilience and the Future

The third installment of the Key Executive Women in Leadership Forum took place on March 19, 2019 at the American University Spring Valley Building. Following the theme - Resilience and the Future - sessions and speakers focused on cultivating personal resilience in the face of uncertainty and change in the federal workplace while examining the ever-evolving role of women in leadership and government. 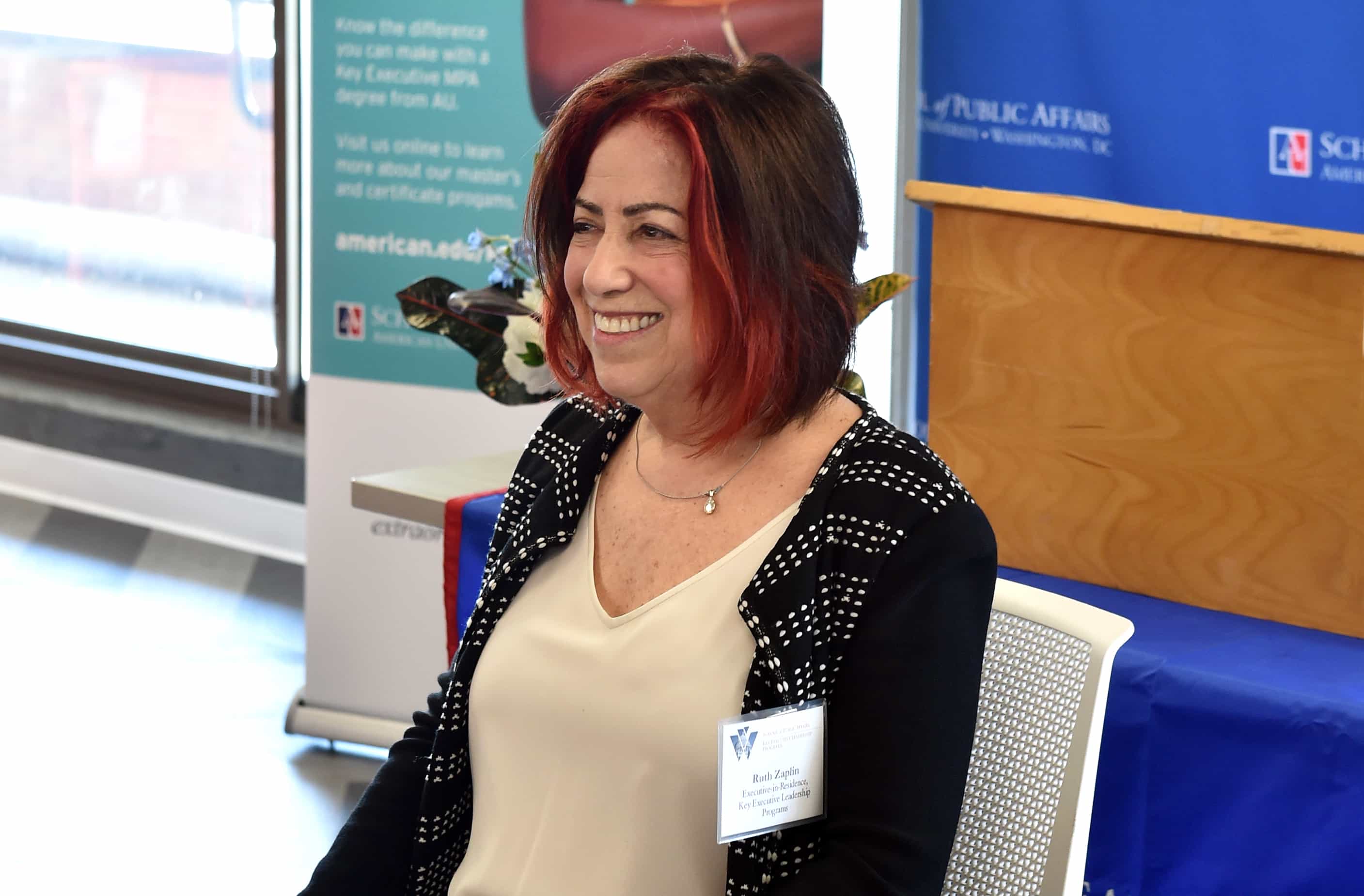 Dr. Zaplin is an Executive-in-Residence in the School of Public Affairs, Department of Public Administration & Policy at American University (AU). She teaches courses in public sector leadership, organizational analysis, coaching for performance, managing conflict, and ethics.

EVERYONE IS ANGRY: LEADERSHIP TOOLS LEARNED FROM CONFLICT RESILIENCE WITH ROCHELLE HOWARD 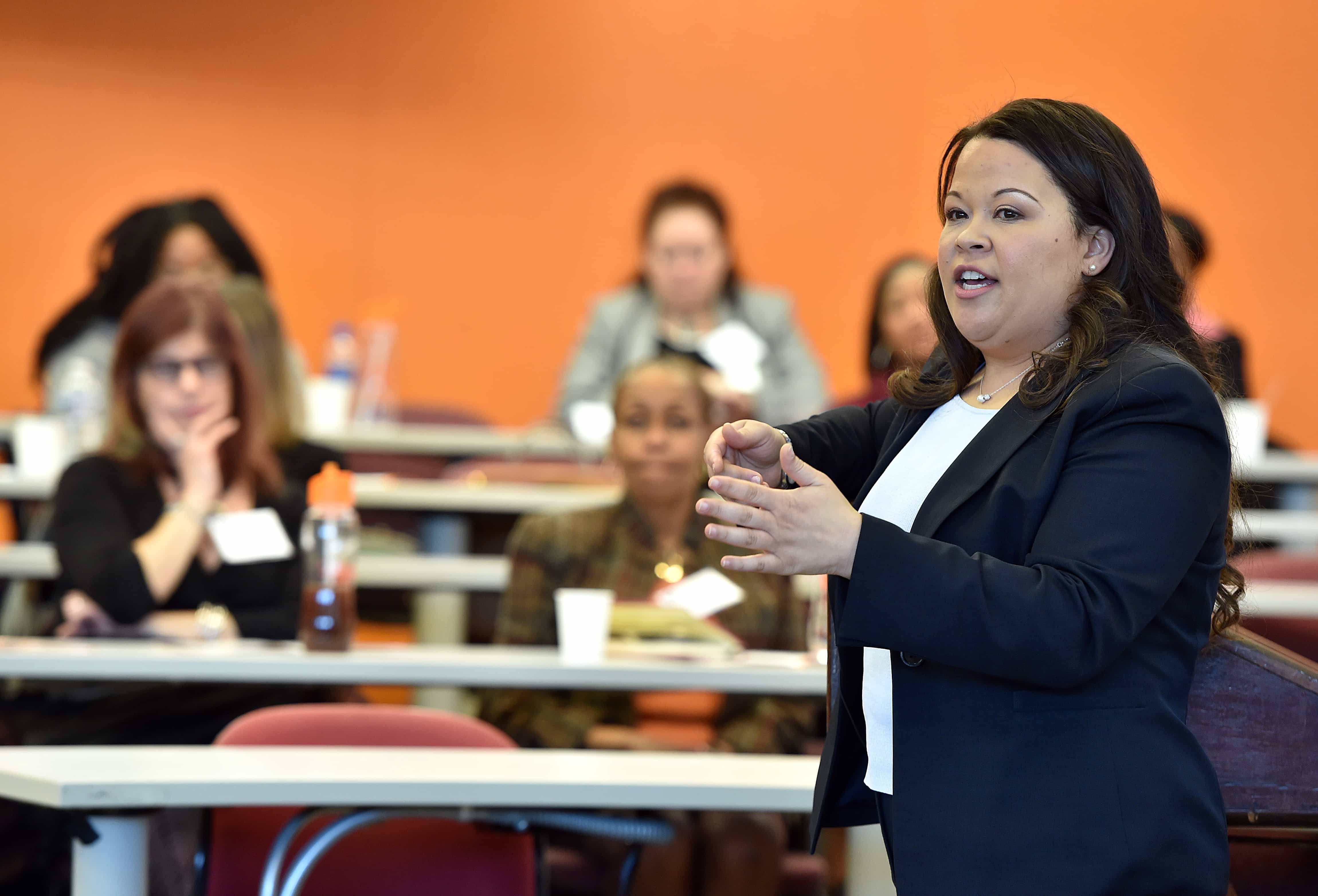 In the current national environment, tensions are extremely high. Divisiveness and confrontation are the automatic reactions to many disagreements.  As leaders, how do we ensure our relationships foster a collaborative, forward thinking posture?  How do we lead with resilience and encouragement to promote sustainable working relationships?

Many federal agencies have alternative dispute resolution programs to resolve workplace disputes.  Similarly, community mediation works to solve disputes but amongst the various community stakeholders.  This workshop will discuss the principles leaders can use to ensure organizational and community relationships persevere through the tensions.

Women and the Future with Diana Blithe, Kimya Lee and Terry Gerton, Moderated by Gwen Sykes 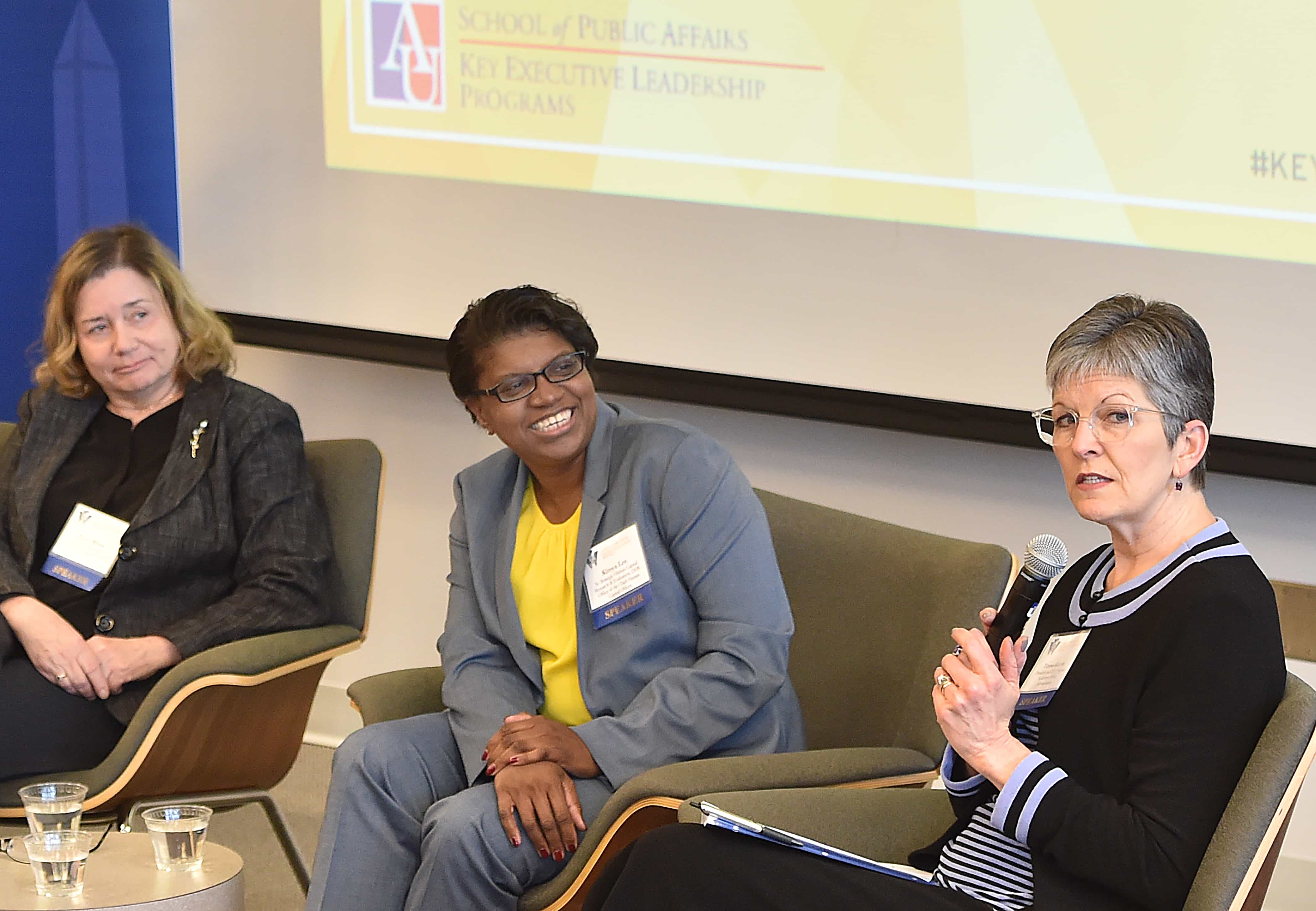 Research has shown women are more likely than men to face challenges in career advancement despite both groups reporting equal desire to succeed in their respective organizations.

This panel will examine current trends and cultures surrounding women in the workplace, evaluate unconscious biases and innovative policies, and discuss how women can be successful in the face of today’s challenges through resilience and vision. 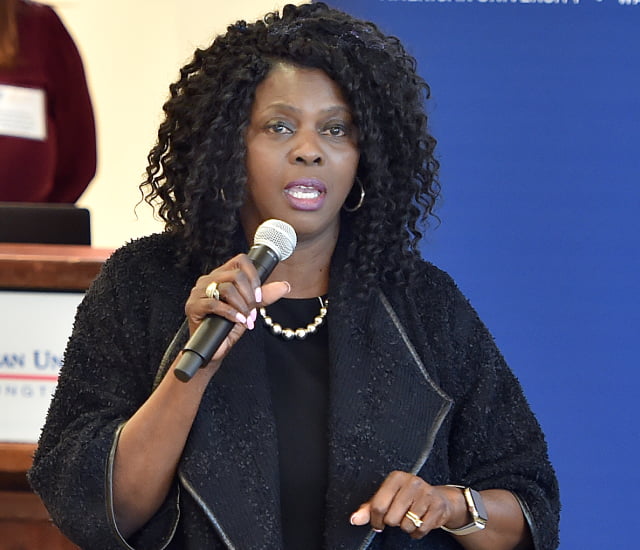 Dr. Jacobs-Young is the Administrator of the ARS, USDA’s chief scientific in-house research agency, and currently also the Acting Chief Scientist of USDA. Prior to joining ARS, Dr. Jacobs-Young held several scientific leadership roles to help transform USDA’s scientific coordination and create a lasting impact on the conduct, quality, integrity, and access to science for customers, stakeholders, and partners. She has also worked to elevate the visibility of collaboration and coordination of agricultural research globally.  She is also a graduate of American University’s Executive Leadership in Public Policy Program, a Fellow of the American Association for the Advancement of Science and a 2016 recipient of the Presidential Rank Award.

The second Women in Leadership for 2019 was held at the AU Washington College of Law, featuring two sessions and a plenary speaker. Participants worked with a team from Eagle Hill Consulting, one of Key's partners, to learn about trends in work culture and change management and explored conflict resolution.

Much of an agency’s ability to meet its mission in today’s world hinges on its ability to change. How well do federal teams embrace change? Eagle Hill recently fielded research with Government Business Council to answer that question. Turns out, it may be time to redefine the playbook for how workplace teams in federal deliver change. This interactive session will share three critical elements of high-functioning teams that will help you create the playbook for winning at change today.

Ellen McClain recently completed in January 2019, a three year term as a Special Assistant and rehired annuitant with U.S. Customs and Border Protection, returning to the agency where she began her government career more than three decades ago. Prior to retiring in 2015, she served the Department of Homeland Security as Deputy Assistant Secretary (Transborder Security) from 2012-2015 and as Assistant General Counsel (Enforcement) from 2003-2012. Ms. McClain was the Deputy Associate Chief Counsel (Enforcement) for the U.S. Customs Service from 1985-2002 and Deputy Assistant General Counsel (Enforcement) at the Department of Treasury. During her lengthy career, she received several awards from both the Secretary of Homeland Security and the Commissioner of Customs. She received the General Counsel’s Extraordinary Achievement in National Security or Homeland Security Law in 2008 and was nominated in 2003 for the Federal Bar Association’s Transportation Attorney of the Year for her contributions to setting up the Department of Homeland Security. In July, Ms. McClain joined InterVISTAS Consulting Inc as Vice President. She is serving as the President of Executive Women in Government. Additionally, she serves on the advisory board for Interages and as a Court Appointed Special Advocate (CASA). Ms. McClain holds degrees from Duke University, Vermont Law School, and Georgetown University Law Center.