Monopoly over a trade, constitutional power, and landowner disputes. These are just a few of the landmark court cases that changed the course of legal history in Europe. Now, in a new book written by SPA Professor Bill Davies and AU Law Professor Fernanda Nicola, you can read some of the most significant EU rulings ever made.

The book, "EU Law Stories: Contextual and Critical Histories of European Jurisprudence" was published by Cambridge University Press in June. More than 30 historians, political scientists, international relations experts and lawyers contributed to the 656-page volume, which analyzes some of the most significant rulings made by the Court of Justice of the European Union. The chapters include stories from cases affecting civil rights, democracy, economics and external relations. 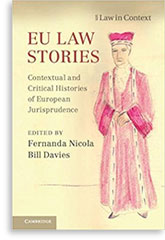 In writing the book, Davies, who is originally from the United Kingdom, and Nicola, who is from Italy, used their understanding of Europe and applied their insight from the American system of justice. The book aims to retell stories in an accessible way, adding "color and texture" to the cases, to appeal to a broad audience from academic researchers to students, says Davies.

"We thought it was important to look at cases in a more contextual way to see what was really going on behind the scenes," says Davies, an associate professor in their School of Public Affairs.

Nicola is director of the Program on International Organizations Law and Diplomacy at Washington College of Law. The authors came into the book project - which took three years to write - from different perspectives.

The result of the interdisciplinary approach was a deeper look at the evolution of EU law through a collection of famous and not-so-famous cases, says Davies.

The co-authors presented their research at Law and Society in Minneapolis in 2015, EUSA in Philadelphia in 2016, and European University Institute in Florence 2017. They will host a book launch on campus this fall, and will travel to Luxembourg to share their work at the European Court of Justice.