American University presidents have a legacy of demonstrated leadership in sustainability by committing along with more than 600 other college and university presidents through the Climate Leadership Commitments and along with more than 2,600 leaders from multiple sectors in the We Are Still In pledge to engage in climate action. The strength of a movement comes from its participants, and we are part of a growing number of institutions that are committing to achieving ambitious climate goals and pushing for increased global action. At American University, we have turned these pledges into actions that are visible in our buildings, transportation programs, and classrooms.

In April 2017, President Burwell signed "We Are Still In," pledging AU to continue to work toward achieving the goals of the Paris Climate Accord.

In February 2012, nine presidents from DC colleges and universities joined Mayor Vincent Gray to sign the District of Columbia Mayor's College and University Sustainability Pledge to work together to make DC the "greenest college town in America." 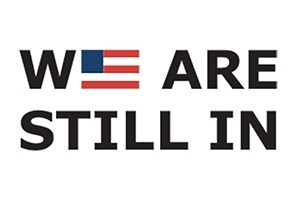 AU is one of a collective of 1,218 universities and other leaders to say they will ensure the US reduces its carbon footprint in the near future.