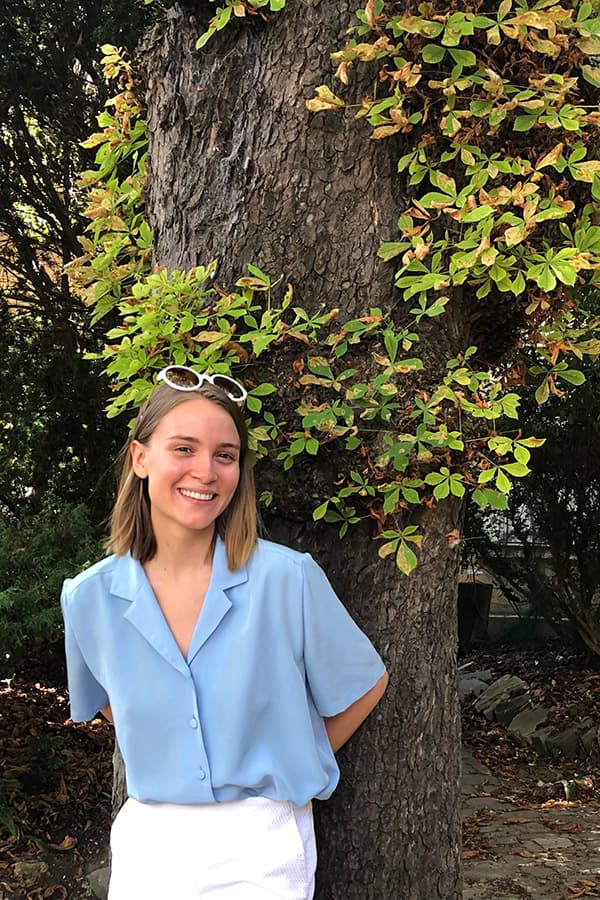 Miranda Dotson (BA cultural anthropology, French language and culture ’21) has made her mark during her time at American University. Her professors describe her as “a purposeful leader” and “academic all-star” whose intellectual curiosity and commitment to social justice are reflected throughout her scholarship and activities. She maintains a 3.98 GPA, has made the Dean’s List every semester, and is the recipient of numerous awards and fellowships, including the National Science Foundation Graduate Research Fellowship, American University’s Outstanding Leadership in Environmental Activism Award, and the Mount Vernon Leadership Fellowship. Dotson recently published her first article in the respected journal Environmental Justice and has several other pieces currently under peer review. She is also a fluent French and German speaker.

Next year, Dotson will become a fully funded PhD student in sociology at Northeastern University. Her professors point out that she is more than ready for the challenge. “Her ambitious research and publication profile resembles that of a newly graduated PhD student, not an undergraduate,” says Professor David Vine, who serves as Dotson’s Department of Anthropology adviser. “When I first met Dotson at our weekly Social Impact Talks, I immediately assumed she was a graduate student, such was the level of her questions, comments, and analytic insights. That a first-year student attended our weekly talks attended almost exclusively by graduate students was one sign of Dotson’s unusual seriousness as a student and scholar.”

Dotson spent her junior year in France, studying at the University of Nanterre in Paris through AU Abroad. While there, she was the lead author of “Allergic to the Region”: A Population-Based Study of the Diversity of Health Experiences in the Industrial Zone of Marseille, France, which was published in Environmental Justice in 2020.

The article analyzes health data, collected during an earlier study, EPSEAL, which focused on a cluster of towns in a heavily polluted industrial zone on the port of Marseille, France. In addition to quantitative measures of residents' health outcomes, the study included open-ended questions to gain a more personal perspective about the health issues that can likely be linked to ambient industrial pollution. It resulted in giving voice to a diversity of health experiences, and sometimes unexpected health outcomes, which is all critical to informing future research inquiry into the community health of populations who live near industrial zones.

Dotson’s paper reviewed the responses to the question: Is there anything else you would like to share with us about your health experiences? “The abundance, and often richness, of responses revealed that participants were eager to shed insight on the range of health outcomes that can occur in a heavily polluted zone — experiences that should serve as serious testimony to the importance of local knowledge when investigating the impacts of pollution,” she says.

Dotson has recently written another lead-author article, which documents the experiences of college students learning online while sheltering in place during the COVID-19 pandemic. It is currently under review with the Journal of College Student Development. The article results from Dotson’s role as lead qualitative research manager to the “COVID-19 College Cohort Study” led by Alison Cohen (University of California, San Francisco) and Lindsay Hoyt (Fordham University), which documents the experiences of college students in the United States during the COVID-19 pandemic. Dotson expects to have at least two more co-authored articles emerge from this study. She plans to submit another first-author article on some of the cohort study’s qualitative data that assesses how college students’ relationships have changed in the wake of the pandemic.

For her senior thesis, Dotson is conducting a digital ethnography on the experiences of living with acne, examining stories about acne that have been shared by vloggers on the popular video-sharing platform YouTube. “YouTube is like a really cool archive of what could be considered as in-depth interviews that are eagerly, and publicly, shared by vloggers — I think it’s an untapped resource for contemporary ethnographies that look to examine experiences of communities with a strong presence on the internet,” Dotson explains. “This has certainly been the case for my research, which looks to understand how people describe the social significance of living with acne and pursue healing.”

In addition to these projects, Dotson has written an impressive number of articles for mainstream media outlets over the past two years. They reflect her strong interest and innovative thinking in the sphere of social justice: “College tuition costs more than what’s on the bill” (The Nation), “A Reflection on the Fear of Not Being Forgiven” (The American Agora), “What Racism & the Apocalypse Have in Common” (Medium), “(White) Students: Why You Should Go on a Tuition Strike Fall 2020” (The Blackprint ), and her translation from French to English of the Bourg, et al. article “35 Proposals for a Return to Earth” (La Pensée Écologique).

Vine says that Dotson has been an outstanding member of AU’s Department of Anthropology community, both informally and in her formal role as undergraduate representative. “Dotson has been extremely generous in finding innovative ways to support fellow students in their own academic and career paths,” he explains. “This time-consuming work reflects the exemplary scholar Dotson is: one focused not just on advancing their own career, but also on supporting the careers and lives of others.”

Assistant Professor of Anthropology Manissa M. Maharawal has served as Dotson’s faculty advisor and also works with the undergraduate committee. She says that Dotson’s peers benefit from her work and commitment. “Miranda’s work in meeting with other anthropology undergraduate majors and reporting back about their needs and preferences in these trying times has been incredibly helpful in ensuring that the committee stay connected with student needs,” she explains, adding that Dotson is a “beloved member” of American University’s anthropology community.

In graduate school, Dotson says she is looking forward to continuing her research on community-based participatory research and expanding commitments to social justice and political activism as standard practice within the disciplines of social science.

Dotson says she is grateful for the faculty at American University. “I am indebted to my professors at the Department of Anthropology and the Department of World Languages for creating a learning environment that was both challenging and warm. Under their tutelage, I learned that research can, and should, be a tool for justice and contribute to a world that is safe, healthy, and dignified for all.”