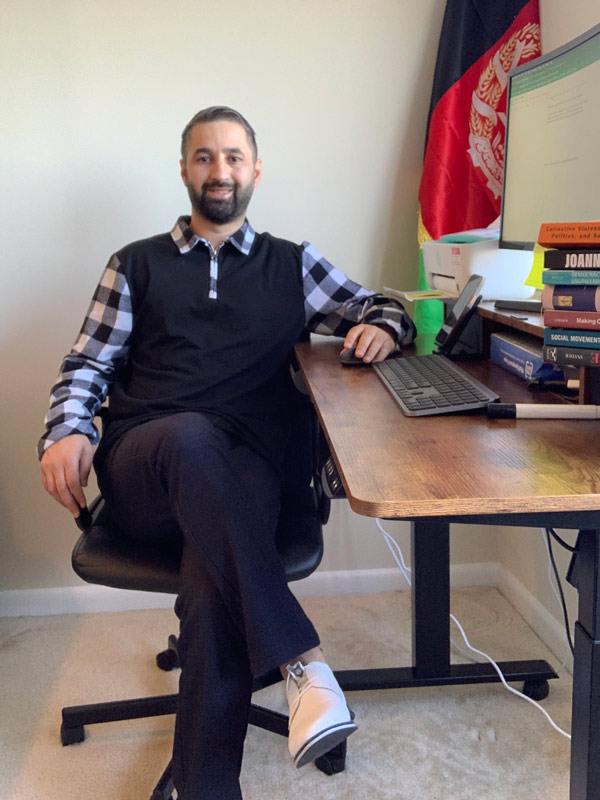 In January, the College of Arts and Sciences welcomed M. Bashir Mobasher, AU’s first Afghan Exile Scholar Postdoctoral Fellow. From the safe setting of American University, Mobasher is pursuing his scholarship, while supporting Afghan refugees and fighting for human rights back home in Afghanistan.

From 2018 to 2021, Mobasher was an assistant professor of political science at the American University of Afghanistan (AUAF) in Kabul, focusing on constitutional law and electoral designs in divided societies. When his country fell to the Taliban last summer, he was in the United States, supervising the AUAF’s Journal of Law and Politics and Survey Club. He was also working with the Max Planck Foundation for International Peace and the Rule of Law and International IDEA on administrative law and Afghan immigrant/displaced populations voting rights projects.

Although Mobasher made it to safety in the United States, many faculty, staff, students, and alumni of the American University of Afghanistan were not as fortunate. They found themselves trapped in Kabul without visas, unable to leave their country as the Taliban closed in. Knowing that university staff and students would face persecution under the new Taliban regime, they made the difficult decision to burn documents and destroy computer servers across campus.

In the process, Mobasher lost most of his career’s worth of files and notes — everything that was not backed up on his laptop. But despite this setback, he has continued to write and publish widely: chapters for an upcoming book for Routledge, policy articles for prestigious journals, and a series of powerful op-ed pieces about Afghanistan, including “What Does the Future Hold for the New Taliban Government?” for the InterRegional Institute for Strategic Analysis and “Examining the Taliban’s Words, Thoughts, and Deeds: The Myth of Taliban 2.0,” a two-part series for The Diplomat.

A History of Sheltering Displaced Scholars

Mobasher’s presence at American University, made possible in part by donations from CAS alumni, follows in a long university tradition. “AU sponsored German scholars in exile who fled Nazi Germany in the 1930s, including Ernst Posner, who came to chair the History Department, and Friz Karl Mann, who chaired the Economics Department,” says College of Arts and Sciences Interim Dean Max Paul Friedman. “I myself have family members who survived the Holocaust by finding sponsors in the United States, so it touches my heart to see this tradition continue at AU in our own time."

Exiled scholars bring with them new ideas and perspectives, and they enrich AU’s thriving, intellectual community, says AU Professor of Sociology and Immigration Lab Director Ernesto Castañeda. “I thank Dean Friedman for his support and determination to house an Afghan exiled scholar. Bashir is a great human being and scholar. It has already been a pleasure to work with and learn from him.”

In the brief period that Mobasher has been at AU, he and Castañeda have completed two grant proposals. “Mobasher’s work is top quality,” Castañeda says. “It helps us understand what happened in Afghanistan and illuminates the challenges of democracies with diverse populations, which is all of them. His book will make an important contribution to academic, legal, and policy discussions about constitutional and electoral design and their implications for either accommodating groups and individuals or excluding minorities and polarizing citizens.”

Mobasher earned his BA from the School of Law and Political Science at Kabul University and his LLM and PhD from the University of Washington. He is a seasoned educator who has taught many political science and law courses, and he will teach “SOSY-370: Power, Politics and Society” this fall at AU. Next year, he will teach two courses, one on Democracy and another on Afghanistan.

Afghanistan is never far from Mobasher’s heart and work. He is working with Castañeda, Mubbashir Rizvi from the Department of Anthropology, Tazreena Sajjad at the School of International Service, and a team of AU students to document the experiences of recent Afghan refugees to the DC area. This wave of refugees, who fled Afghanistan as the Taliban closed in, includes a high percentage of academics and other professionals, including lawyers, judges, doctors, and artists. Mobasher’s research project focuses on how they are adapting to life in the United States, particularly in terms of employment. Are they able to find jobs that resemble their previous careers in Afghanistan? Are they able to transfer education and expertise to the US job market? Or will they need special training to prepare them for new careers and new ways of supporting themselves and their families?

At the same time, Mobasher is also focused on the people back home. He explains that the Taliban have already begun segregating schools by gender and introducing a dogmatic curriculum that censors the fine arts, scientific inquiry, critical thinking, and freedom of thought and expression. Mobasher fears for the next generation of Afghans. This sort of education, he says, radicalizes young people and is “not good for anyone in the world.” With help from AU's Chief Online Officer Joseph Riquelme and the College of Arts and Sciences, he is exploring ways of providing online courses for Afghan girls and women who either no longer have education opportunities or are exposed to a dogmatic and radicalizing education.

Friedman says that Mobasher is a tremendous asset to the AU community and to his country. "Bashir is not only an accomplished scholar and gifted teacher who is already working collaboratively with CAS faculty and mentoring our students in research methods, but he is putting his considerable energies and talents to use for the benefit of other Afghans at home and abroad to ensure their access to education despite the Taliban's repression.”

Mobasher says he will keep fighting for Afghanistan. “Even from here, I will stay connected to the issues and continue to write. It’s my civic duty, and it’s my way for fighting the Taliban and the dogma of the Taliban.”