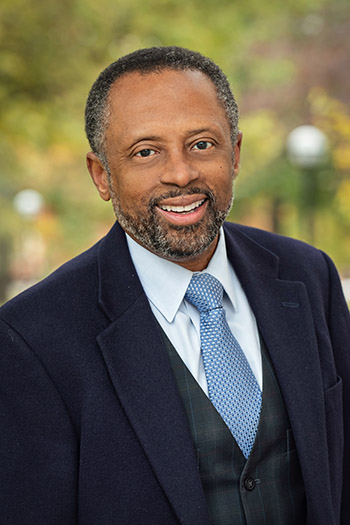 On Thursday, January 27, at American University’s virtual event, “Why Higher Education Must Join the Fight for Reparations,” Dr. Earl Lewis spoke about a bold new initiative to develop reparation plans for nine communities across the country. Lewis and his colleagues at the University of Michigan’s Center for Social Solutions will lead the initiative, “Crafting Democratic Futures,” which is funded by a generous grant from the Mellon Foundation.

The reparation plans will be developed by nine teams of university scholars and community partners, who will research and develop recommendations for racial reparations in their jurisdictions. Once this is completed, each team will present its findings to local policymakers, including suggestions for implementation. The process will serve as a model for other cities in the future.

Lewis is the Thomas C. Holt Distinguished University Professor of History, Afro-American and African Studies, and Public Policy, as well as the Director of the Center for Social Solutions at the University of Michigan. Previously he served as the sixth President of the Andrew W. Mellon Foundation and as Provost at Emory University. An esteemed social historian and author and/or editor of eight books, he is also the past President of the Organization of American Historians.

Lewis’ visit to American University was sponsored by AU’s Antiracist Research and Policy Center (ARPC) and the AU Provost’s Office. Brian McGowan served as the event moderator. McGowan is an Associate Professor in AU’s School of Education and also the Associate Director of Pedagogy and Higher Education Research in AU’s Center for Teaching, Research, and Learning.

Dr. Earl Lewis: "Why Higher Education Must Join the Fight for Reparations"

At each participating university, says Lewis, historians, sociologists, and other humanist social scientists will work with community fellows, selected for their work on matters of race and justice, to co-author local histories and engage key community stakeholders and governments in local reparations solutions.  Lewis believes this approach will allow students and scholars to demonstrate the relationship between theory and practice and to underscore the ways in this instance humanities research should shape policy solutions and discussions.

According to Lewis, taking a humanist approach to reparations centered on local histories is an important vital step toward a national plan that will hopefully lead to earmarked federal dollars. “As history has shown, oftentimes national action follows strategic work by local actors,” he explained. “That is undeniably one of the lessons to be extracted from the history of the Civil Rights Movement, from Montgomery to Greensboro, Albany to Birmingham, Atlanta to Selma, men, women, and children organized at the local level to achieve change at the national level.”

The Time is Now: The AU Connection

“As we confront a new ongoing toll of a health pandemic, the challenges of millions of unemployed in a world shaped by systemic macroeconomic change, as well as the lingering powerful pull of racist practices and racism,” Lewis told the audience, “there is a part of me that hopes and trusts that this institution, in the spirit of its founding, is doing all in its power to address the confluence of all of these challenges, as well as others that have so far gone unnamed.”

American University is continuing the process of understanding its own complex history through its inaugural Public History Graduate Fellowship in the History of Slavery of Legacies in Washington DC in partnership with the White House Historical Association.

Although AU was founded by John Fletcher Hurst on the principles of experiential learning, global leadership, and public service — and it admitted women and African American students before most other institutions of higher education and defended that practice against resistance from influential members of the segregated District — the campus was built on ground known as the “Friendship Tract.” This land was part of an agricultural economy based on the labor of enslaved African Americans in the greater Chesapeake region and passed through the hands of slave-owning families. And before that, the land was wrested from the indigenous population of the Piscataway Nation by force or the implicit threat of force. Later, African Americans who lived in and around where the university was built were pushed to neighboring communities that later went through repeated waves of gentrification and development.

Last summer, American University established a university-wide working group named “Groundbreaking: The Legacy of Enslavement and Settler Colonialism at American University and Beyond.” The group is researching the intersection of Black history, Native American history, and local history and their legacies for the AU campus and surrounding neighborhoods. Findings will be disseminated through a variety of formats, worked into the curriculum, and commemorated in physical and virtual sites. All findings will be shared with the public, on a new website, and on memorial markers and spaces. AU’s history, both positive and negative, will be incorporated into its commitment to antiracism work.

This project will contribute to the kind of community-based historical reckoning that Dr. Lewis sees as essential to progress on a national level.