Young women are less likely than young men ever to have considered running for political office, to express interest in a candidacy at some point in the future, or to consider elective office a desirable profession, a study conducted by American University professor and director of the Women & Politics Institute Jennifer L. Lawless and Loyola Marymount University professor Richard L. Fox finds.

In their new report, Girls Just Wanna Not Run: The Gender Gap in Young Americans’ Political Ambition, Lawless and Fox detail the results of a survey of a national sample of more than 2,100 college students.

Men were twice as likely as women to have thought about running for office "many times," whereas women were 20 percent more likely than men never to have considered it.

"High-profile women in politics may suggest that the landscape of U.S. politics has changed and that male dominance has waned. But we need to be careful not to conclude that women today are just as likely as men to aspire to run for office and that, in the future, women will be eager to seize the reins of political power," Lawless said. 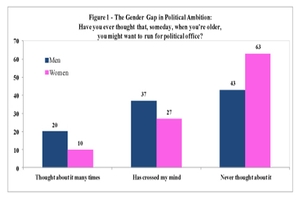 The dramatic 20-point gap between women and men’s interest in running for office is just as large as the one authors previously uncovered among adult professionals in their 40s and 50s who were well-situated to pursue a candidacy.

"The gap is so large that women’s under-representation in elective office is likely to extend well into the future because of the deeply embedded nature of the obstacles we must still overcome to achieve it," Lawless said.

So, why are young women less likely to consider political office? The report identifies five factors that contribute to the gender gap in political ambition among college students:

1. Young men are more likely than young women to be socialized by their parents to think about politics as a career path.

2. From their school experiences to their peer associations to their media habits, young women tend to be exposed to less political information and discussion than do young men.

3. Young men are more likely than young women to have played organized sports and care about winning.

4. Young women are less likely than young men to receive encouragement to run for office – from anyone.

5. Young women are less likely than young men to think they will be qualified to run for office, even in the not-so-near future.

"Given this persistent gender gap in political ambition among college students, we are a long way from a political reality in which young women and men are equally likely to aspire to seek and hold elective office in the future," Lawless said. "If we are to attain eventual parity in politics, then we need recruitment efforts by women’s organizations to chip away at the gender imbalance in interest in running for office."

Lawless also points to the importance of encouraging parents, family members, teachers, and coaches to urge young women to think about a political career to help lessen the gender gap in ambition.

She adds that it is crucial for young women to join organized sports and experience competitive environments because it reinforces the drive needed to run for office.

Parental encouragement to run for office has the potential to be a great equalizer, Lawless said. The report found that male and female college students who were regularly encouraged by their parents to think about running for office were equally likely to express interest in a future candidacy.

The problem? Despite comparable levels of political exposure and discussion in households where they grew up, by the time they reached college, young men received higher levels of familial encouragement to run for political office than did young women.

"Parents need to encourage their daughters to run for office not only when they live under the same roof, but also when they go off to college and face a broad array of career choices and professional options."