American University (AU) graduate students attended the American Conservation Film Festival (ACFF) in Shepherdstown, WV and took home the Student Film Award for Keeping the Potomac: The Politics of Water-created during the semester they spent in professor Mike English's Environmental Filmmaking for Public Television class, COMM 568. The documentary examines the efforts of three local river keepers to hold polluters accountable along the Potomac River watershed. This is the latest in a string of AU School of Communication student productions being recognized by the festival.

The filmmakers were Tony Brunner, Chelsea Greene, Elizabeth Herzfeldt-Kamprath, Sarah Liebman, Doaa Nour, Raffi Paul, Sam Sheline, Xinyi Song, and Kent Wagner. Key leadership roles were played by Herzfeldt-Kamprath, Sheline, and Wagner, who were honored at ACFF. The award comes with a $500 prize and support for the filmmakers to attend the festival. 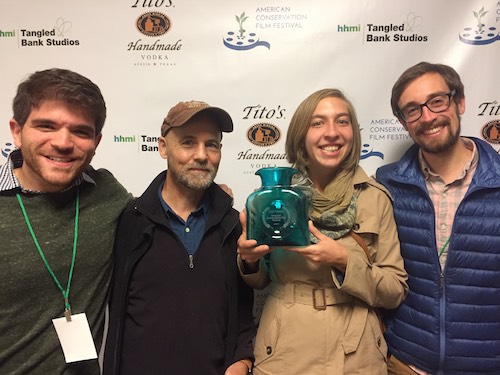 Herzfeldt-Kamprath, an MFA student in Film and Electronic Media, said, "Screening Keeping the Potomac was an incredible experience. Shepherdstown is viscerally affected by many of the issues presented in the film, so it was a powerful opportunity to share the work of the Potomac Riverkeeper Network with this audience. It was also an honor to receive the student film award. A lot of hard work went into creating this film for public television, and we are delighted to reach more audience through screening it at festivals."

Center for Environmental Filmmaking has developed a strong relationship with ACFF; the Center sponsors SOC students every year and students always report back that it is a valuable experience. This year CEF was able to send nine students.

"One of the goals of the Center for Environmental Filmmaking is to help students advance significantly in their careers, and one way to accomplish that goal is to send students to outstanding festivals like ACFF where they can show their films, make high-level contacts, and learn from top filmmakers," says CEF Director Chris Palmer. 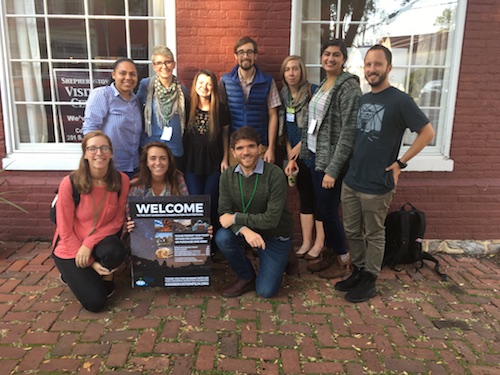 Wagner, who is also pursuing his MFA, said, "[We had] a great time at the American Conservation Film Festival and the Conservation Filmmakers Workshop this past weekend. Overall the presentations were excellent. There was a terrific mix of topics covering conservation, storytelling, gear, and a lot more. Special attention was placed on how to increase the impact of conservation films."

"Filmmakers and presenters from National Geographic, The Smithsonian, and a variety of other local production companies were there. It was great to meet other students and professionals and to learn about their films and to share stories."