Derek Hawkins has the unique opportunity to work with a large team at the Washington Post on a series about killings by police that is giving voice to dozens of families who would otherwise have none. In doing so, he was among those who won the 2016 Pulitzer Prize for National Reporting as well as the 2015 George Polk Award for National Reporting.

Hawkins was drawn to the journalism program at American University by an investigative practicum offered by the School of Communication (SOC) that has him embedded in a team of reporters at the Post. Uneven Justice, his project that was included in the package submitted to Pulitzer and Polk, is an exhaustive study of civil suits brought in killings by police officers.

It was exactly this kind of opportunity that had brought Hawkins to SOC for graduate school. “I had decided I had to make an investment to go to the next level,” says Hawkins.  He decided on AU after talking with professor John Sullivan, a Pulitzer Prize-winning journalist who runs the SOC practicum.  “I saw the opportunity for a good mentor and partner in John.  I thought if I came to AU, he’d have my best interests in mind. I took a risk, coming into the program, and it has paid off.”

The project stemmed from a Post initiative to build a comprehensive database on police shootings. FBI data on police shootings is self-reported, and thus highly questionable. The Post’s final numbers were twice the official FBI numbers. 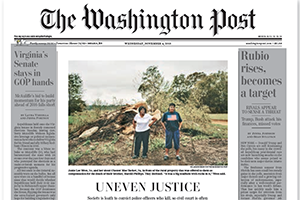 The Post carried Hawkins' story and byline on the front page.

When Hawkins arrived at the Post in August, Sullivan suggested Hawkins join forces with Marc Fisher and Scott Higham – long time respected reporters at the Post – on an investigation around civil lawsuits related to police shootings.

“For the first time, the Washington Post was able to actually document the real number of police shootings in America. We were trying to get our arms around all of the data,” said Higham. “I am really proud of what the Post has done; I’m proud of what everyone on the team has done, and what Derek has done. It’s not often you can claim a Pulitzer before you graduate.”

Sullivan had thought Hawkins would be a good fit for the project: He had been a beat reporter with Law 360, and knew the federal court system.  The project was also in line with Hawkins’ passion for creating positive change on intractable social problems through journalism. “I’m not an activist,” he says. “I don’t deal in messaging, just providing the facts.”

"Derek's experience shows what's possible when students come to the Post through the practicum, and that's just about anything. AU students have worked on just about every major investigation the paper has embarked on over the past few years. We've also had students find, report and write their own investigative stories which have run on the Sunday front page. Most exciting for AU students, I think is, the chance to work alongside other Post reporters, like Derek did with Marc and Scott."

After months of intensive work, what they found was that there are broad discrepancies between case resolutions. Expertise from all over the newsroom was brought to bear to produce the final piece. 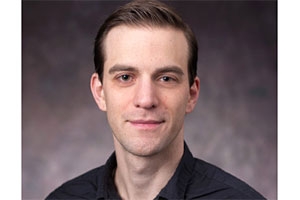 On working at the Post, Hawkins said, “I'm grateful beyond words to work with such an incredibly talented and driven group of people. These are some of the best reporters and editors in the game. I'm honored to be a part of their team.”

He also values his time spent at SOC’s Investigative Reporting Workshop, another component of the graduate investigative track. “It’s a mentoring and encouraging environment.” He says that his access to expertise at the Post and the Workshop have given him an advantage as he moves beyond graduate school. “I have a really strong network, I’m in a stronger position professionally now.”

Although his time at the Post is coming to an end, the project he’s been committed to for the past year is still going strong.  A recent front page story shows one in five police officers involved in shootings do not have their names disclosed, and explores what that means for the families of the victims and our overall system of justice. Hawkins, alongside Sullivan and fellow practicum students Ashley Balcerzak and Kate McCormick earned bylines for the piece.  Over the coming year, the Post will continue its revealing coverage of fatal police force in America, a story AU journalism students will play a prominent role in.