When most students head to Mexico for spring break, they are looking for sun and fun. American University (AU) MFA film student Matt Cipollone, on the other hand, was carrying equipment and capturing the perfect shots for a documentary film project led by award-winning international journalist and AU School of Communication professor Bill Gentile.

They were shooting the pilot for a series, "Freelancers," produced by Gentile who was once a freelancer himself. "Freelancers" revolves around the new generation of young, aggressive, and tech-savvy journalists increasingly filling the void left by mainstream media outlets cutting back from foreign news coverage.

"The film is about 'freelance foreign correspondents' working abroad, mostly for Western media outlets," said Gentile. "In Mexico, at least, these freelancers are mostly U.S. citizens. The film also includes local journalists on whom the freelancers sometimes rely for information and guidance. This is especially true of the 'fixers,' who are almost always local journalists working to support foreign correspondents."

When asked how he selected the freelance correspondents to include in the film, Gentile explained, "I decided whom to work with mostly on the basis of their prominence in the field. For example, one of the freelancers, British citizen Ioan Grillo, works with The New York Times and Time magazine. Another, a Canadian, works with USA Today and the Guardian. Still another, a U.S.citizen, is a very successful photojournalist who has done terrific work in the Mexican City of Juarez, at one time one of the most violent cities on the planet."

Gentile brought on Cipollone, his Teaching Assistant, to work with him on the project "because he is good with the camera and because he is familiar with CNN's 'Anthony Bourdain: Points Unknown' model that we want to emulate," Gentile said. "We work well together."

"Professor Gentile knows I've worked in a similar environment before and he has also served as a mentor for ongoing documentary work I've produced for various non-profits, so he knows how hard I've worked to improve my filmmaking since beginning my MFA at AU," Cipollone said.

Cipollone had produced a documentary in Nicaragua as part of his Backpack Documentary course, and that project required similar equipment to what he is using on "Freelancers," and the solid experience he had accumulated in Nicaragua made him a good fit for this project. But he still feels lucky. "I am incredibly fortunate to have been given this opportunity as a student," Cipollone said. 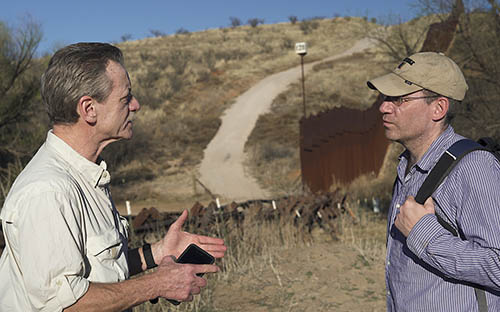 Gentile is not only the creator of the production, but also the executive producer, writer and narrator. "I will be seen as a common thread through all episodes, as I will appear with our subjects and talk them through each episode," he said.

Cipollone had several roles in this project too. He served as an associate producer, sound recordist and director of photography. "I was the sole camera operator. We carefully picked our gear and traveled as lightly as possible, which enabled me to be in charge of both camera and audio," Cipollone said.

The two are now back from Mexico and focusing on post-production and distribution. Gentile says he hopes "Freelancers" will appeal to a general audience.

"Especially now that we have a president who calls the media an 'enemy of the people,' I believe it critical to show who journalists actually are, and what they actually do," Gentile said.