In December 2018 American University School of Communication (SOC) sent its second graduate student delegation to China through the China-United States Exchange Foundation (CUSEF). Five SOC students were selected to visit China on a 10-day trip introducing them to China’s modern-day politics, business, and culture. During the trip, students met with high-level and provincial level government, think-tanks, media and private industry leaders, and had a chance to experience quintessential Chinese attractions in the cities of Beijing, Yinchuan, and Shanghai.

Taking part in the student journalism delegation is not only a feather in any student's portfolio, it's also great for networking with peers.

"I made strong connections with the other delegates, many of whom are journalists focusing on environmental issues," said Amelia Tyson, a second-year MFA student in the environmental filmmaking concentration. "These connections are invaluable sources of knowledge-sharing and potential future collaboration, and new friends are sources of encouragement and friendship. I learned a lot more about the true effect global climate change is having on the world, as evidenced by what was shared about weather patterns and environmental challenges the country is facing." 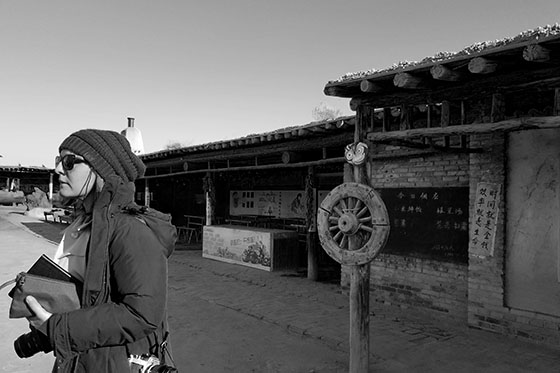 Amelia Tyson visited the China Western Film Studio where over 200 movies have been filmed. The studio lies 22 miles West of Yinchuan city in Ningxia. During the Ming and Qing Dynasties it was the site of Zhenbeibu Frontier Castle that was used to defend against northern tribes. Photo by Gabriele Litkauskaite.

Tyson is originally from Huntsville, Alabama and wanted to travel to China because she’d never been and had always been curious about the country.

Robert Anthony Boyd III, from Franconia, Virginia, is also in the MFA program with a concentration in environmental Film.

"China has been in the news quite a bit recently," said Boyd. "I wanted to travel there myself to get an impression of the country. As an environmental filmmaker, I was excited to encounter and film China's wildlife."

Tyson’s favorite part was the trip was "climbing the Great Wall. It was a breath-taking and not easily forgettable experience."

Traveling to China for the first time can be eye-opening in a variety of ways. "I was surprised to see the level of Chinese tourists at the Forbidden City and the Great Wall," said Tyson. "The tourists from different parts of China far outnumbered any foreign tourists."

Boyd also enjoyed the Great Wall, "though I underestimated how difficult a climb it would be." Boyd’s other favorite parts included: “Yinchuan's technological smart grid was really impressive, and touring the city's control center was like walking onto the bridge of a starship. Shanghai's Oriental Pearl Tower was an amazing experience, allowing me to get a breathtaking view of the city."

SOC offers opportunities for lifelong learning experiences that are personalized, accessible, and a cost-effective international immersion. This year, students were able to customize their trip by visiting certain organizations that are of professional interest to them. Branching out and traveling to a foreign country can highlight new creative opportunities, broaden perspectives and lead to some surprising takeaways.

"This trip highlighted the possibility of catering my media towards Chinese markets," said Boyd. "I was surprised to learn about China's social media ecosystem. While it is largely dissociated from other global platforms (Facebook, Twitter, etc.) Chinese social media thrives and serves a large community. It would be interesting to see whether a Western filmmaker such as myself could have a measure of success distributing their films on Chinese social media platforms such as Weibo or WeChat."

"What seems to be important about visiting other countries is the ability to discover the commonality human beings share, our fundamental common hopes and aspirations and, simultaneously, to show us that diversity of approach and process must not become a barrier to working through and solving the common challenges humanity faces,” said Tyson. “Building these connections through exchange and conversation is of utmost importance to a peaceful and healthy future."

Boyd also added, "The food was VERY good." Boyd has posted videos about his experiences in Shanghai, Beijing and Yinchuan.

This is the third year that CUSEF has organized this trip and the second year SOC has participated. Founded in Hong Kong in 2008 and privately funded, CUSEF builds platforms to encourage constructive dialogue and diverse exchanges between the people of the U.S. and China.

Learn more about the 2019 CUSEF China trip and apply by October 2nd.