The policymaking arena - particularly the world of elected officials - tends to be much more social than most scientists’ workplaces. There is an emphasis on relationships, reputations, and (despite what some media reports would have you believe) interpersonal respect and civility. 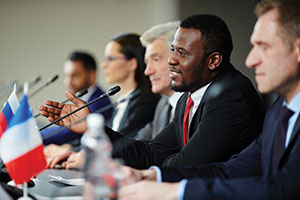 Trust is extended to those who enjoy a positive reputation among policymakers in general as well as to individuals and organizations with a history of productive interactions with an office. Thus, the individuals and organizations with whom you are connected play an outsized role in establishing you as a trusted expert in policymakers’ eyes. Our interviews with Democratic and Republican Members of Congress and staff suggest that most policymakers hold well-established expert institutions, including universities, scientific societies, and government labs and agencies, in high regard. Many advocacy groups and some think tanks have solid histories of positive interactions with offices; thus, joining with such a group can open doors for you - although remember that such groups may also close doors based on their ideological leanings.1

Finally, following the social logic of the policymaking community, personal recommendations are powerful. If someone close to a policymaker recommends you as worth speaking to, there is a good chance that policymaker will give you their time and trust.

The greatest level of trust is given to those with whom an office has built a relationship over time based on productive interactions.2 Relationships are also important for a simpler reason: They increase the likelihood that you are on an office’s radar screen when advice is needed. There is no one recipe for establishing a relationship with a policymaker, although note that your closest relationships will likely be with staffers.

You may be disappointed a Member of Congress does not have time to meet with you. Take the opportunity to meet with a staffer. The staffers we interviewed described carrying out many important tasks, ranging from recommending floor votes to drafting legislation to planning Congressional hearings.

Focus on offices in your geographical area and/or those tackling subject matter closely linked to your area of expertise. Arrange a meeting or call and then follow up occasionally with relevant updates. Remember that relationships should be mutually beneficial. Do your best to gauge whether your communications are welcome and respond right away if an office has reached out to you for assistance. Finally, as one Member of Congress told us, don’t forget to be human. The best professional relationships are also authentic personal ones.

Policymakers we interviewed frequently said they tend to be more interested in working with experts who live in their home state or district. For example, two different Members of Congress described working to pass public health legislation after local doctors and scientists brought important health challenges to their offices’ attention.

Whether you are emailing an office for the first time or sitting down for an in-depth meeting, it is important to give your conversation partner the respect they deserve. While they are unlikely to share your expertise, you should assume that they are intelligent, accomplished in their field, and participating in good faith. Avoid expressing prejudice or stereotyping a person based on their age or group membership, including their political party or religious affiliation. Treat the communication as a dialogue. Leave room for questions and the possibility that your interlocutor may have their own goals for the conversation. When encountering reasonable criticism, counterarguments, or skepticism, respond in a measured way. Such interaction can be a sign that you are being taken seriously. Finally, express gratitude after the interaction; even if an office is unable to help you further, their time is valuable.

According to two Congressmembers interviewed, scientists who are openly dismissive of religion can undermine scientific trust among religious people. Avoid negative comments about religion that are not pertinent to the matter at hand. Scientists of faith can also be excellent ambassadors to religious communities.

Communicating in a Political Context