Born in Phillipsburg, Pennsylvania, Reverend Bruce Hughes attended Dickinson preparatory school and graduated with honors from Dickinson College in 1883. Shortly after graduation, he entered the ministry, becoming a member of the Central Pennsylvania Conference of the Methodist Episcopal Church. His early work focused on building and remodeling churches. Reverend Hughes spent four years as pastor at Blair's Mills in Franklin County, Pennsylvania, where he was instrumental in building a new church in Waterloo, one of the first landmarks of early Methodism. He went on to build four additional churches and dedicate four others during his ministry. Early in his ministry he took a post-graduate course at Syracuse University and finished his degree at Southern University. He was also a member of the consulting staff of subscribers to Success Magazine. Among the publications authored by Reverend Hughes Nuggets of Gold issued in 1901 with the commendation of Bishop Thomas Bowman, senior bishop of the Methodist Episcopal Church; Self-Renunciation in 1902; and The Coveted Inheritance in 1903.

After many years of distinguished service as a diplomat in the United States Department of State, Mr. Savage came to American University to teach in the School of International Service. During his time at AU, faculty and students benefited from his knowledge and experience in foreign affairs. As the advisor to Pan Ethnon, a student organization in the School of International Service, Mr. Savage helped members attract outstanding speakers and plan programs promoting international understanding. He also served as a long-time advisor to Delta Gamma Sorority. After his retirement from AU, Mr. Savage remained active as a volunteer advisor to several student groups. Because of his extraordinary record as a diplomat, teacher, volunteer worker, and loyal friend, President George H. Williams presented Mr. Savage with a Presidential Citation from American University on March 29, 1973.

Born in Modale, Iowa, January 8, 1902, Ms. Seckler-Hudson received a B.S. from Northwest Missouri State Teachers College in 1926, M.A. from the University of Missouri in 1929, and Ph.D. from American University in 1933. She taught social sciences from 1918-1926 at the elementary, junior and senior high school levels, and from 1926-31 taught at Northeast Missouri Teachers College. After receiving here Ph.D. from American University in 1933, Ms. Seckler-Hudon began a nearly 30 year career at American University. During her tenure, Seckler-Hudson served as professor of Political Science and Public Administration; chair of the Department of Government, Graduate School from 1934-38; and chair of the Departments of Political Science and Public Administration. Her most notable service to American University began n 1957 when she was named the first Dean of the School of Government and Public Administration (now the School of Public Affairs). Ms. Seckler-Hudson also held positions with the Federal Government during her time in Washington, serving as Assistant to the Commissioner of Immigration and Naturalization in 1938 and consultant to the Office of Education in the Department of the Interior from 1939-1940.

A noted Washington D.C. financier, Mr. Glover was born on a North Carolina farm in 1846. He rose from inauspicious beginnings as a bookstore and bank clerk to president of Riggs National Bank. After holding that position for twenty-five years, Glover was named Chairman of the Board. Glover also served as the treasurer of the American University Board of Trustees from 1891-1922. Mr. Glover was also associated with the establishment of Rock Creek, Potomac, and Zoological parks in the D.C. area, and the Corcoran Art Gallery. He is memorialized today by the AU gate and the bridge where Massachusetts Avenue crosses Rock Creek Park, which bear his name.

Born at Fort Sam Houston, Texas in 1903, Charles W. Van Way was a retired Army colonel. Colonel Van Way graduated from the United States Military Academy in 1924 and was commissioned in the infantry, serving tours of duty in Hawaii and the Panama Canal Zone. He served on the staff of General of the Army, Omar Bradley, and took part in the Normandy landings in northern France. After retiring from the Army in 1959, he earned a Master of Business Administration at American University and joined the faculty of the AU business school. In 1959 he became dean of students at the University and held that post until he retired in 1968.

Former Vice Chairman and General Counsel of the Association of American Railroads, Mr. Fletcher was first elected to the American University Board of Trustees in 1943. He served as Chairman from 1945-58, and received an Honorary Doctor of Laws in 1947 for his outstanding contributions to American University.

Gail Short Hanson made a powerful impact on a generation of students and helped transform campus life at AU during her decades of devoted, student-focused service. Dr. Hanson came to AU in 1997 as vice president of student services, which became the Office of Campus Life in 2001. During her tenure, she oversaw the growth and transformation of many critical areas, including community engagement, diversity and inclusion, health and wellness, housing and dining, student activities, international student services, and much more. Dedicated to student advocacy and service, she helped AU earn plaudits as one of the top service-oriented colleges and universities in the US. This award continues her legacy by recognizing the crucial role in student life of advocacy and service.

Born in New York City in 1919 and a graduate of St. John's University and the New York Theological Seminary, Reverend Johnson was ordained in 1941, and moved to Washington D.C. in 1945. He was pastor at John Wesley AME Zion, Kingman Park AME Zion, and Plymouth Congregational Church in Washington. After spending 14 years as a computer programmer at the Pentagon, he was named the first black pastor of an all-white Methodist church, Bells Methodist Church in Camp Springs. In 1972, he was named District Superintendent of the North District of the United Methodist Church in Baltimore. Six years later he served as pastor at Millian Memorial United Methodist. He was pastor of North Bethesda Methodist from 1981 until his death in 1985. Reverend Johnson was committed to higher education, serving as treasurer of the Wesley Foundation at Howard University and a member of the American University Board of Trustees. As an AU Trustee from 1975-1985, he served on the development committee and chaired the university's student life committee.

A native of Asberry, Virginia, Mr. Cassell completed academic work at Dickinson Seminary (now Lycoming College) before enrolling at American University and receiving his degree in 1936. Two years later he received a Masters degree from Penn State University. After serving in the Navy and as a coach and athletic director at Morningside College in Iowa, Mr. Cassell returned to American University in 1946. He went on to teach psychology and physical education, serve as athletic director, head of the Department of Physical Education and Health, administrative assistant to the President and Vice President. Under his leadership as athletic director, AU increased its athletic program from three to 11 sports and developed some of the Washington area's greatest athletes. (As an administrator, Dr. Cassell served in virtually every area of university activity, as well as in numerous religious and educational endeavors.) 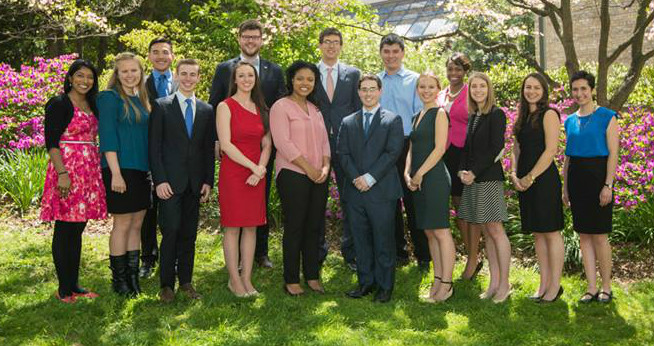 Find out more about University Student Awards and nominate a graduating student!

View past winners of the University Student Awards! These students have demonstrated excellence in service, leadership and academic scholarship.