Blockchain technology is disrupting the financial industry and may be a key piece in the fight against poverty. In 2018, The World Bank estimated that 38% of the world’s population is un(der)banked with up to 84 million un(der)banked people living in the United States alone (1). The un(der)banked represent an economically diverse population who have limited to no access to banking services, generally lack a credit history, and often participate in the underground economy which is estimated to be over $1.9 trillion in the United States. Financial technology solutions, such as Blockchain, can potentially serve as key elements for increasing financial inclusion as it presents solutions to traditional banking restraints, such as physical branch presence and access. Banking the un(der)banked population in the United States is important to economic stability and growth.

The un(der)banked population in the United States is often victim to predatory financial services such as: payday loans services, auto title loans services, pawn shops, and rent-to-own establishments. These predatory financial services charge unfair and outrageously high fees, further penalizing those excluded from traditional banking services. In 2017, the Federal Reserve reported that 40% of American households cannot afford a $400 emergency expense without having to borrow money or sell off assets (2). It is expensive to be poor in the United States; high fees are associated with cashing checks, acquiring money orders, having low checking account balances, or using quick cash services that charge interest equivalent to an annual rate of 50-100% (3). Being un(der)banked means exclusion from traditional credit building services that could enable a loan to purchase a home, car, or start a small business.

The underground economy (also known as the cash or shadow economy) in the United States includes any economic activity that is not reported to the US government and is consequently untaxed. It is difficult to estimate the size of the underground economy due to its nature of it being unreported; however, it is generally estimated by the Federal Reserve to be between 7%-11% of the GDP in the US (4). In 2017 the GDP was recorded to be $19.39 trillion, if we estimate at 10%, $1.939 trillion in cash is being spent within the United States each year that is currently untapped by the traditional banking system (5). Although the un(der)banked lack resources, they spend billions of dollars in the cash economy and on non-traditional banking services. They are an attractive market to be explored by traditional financial institutions and emerging FinTech companies if they can develop the right products.

One pathway to access this market is through a Blockchain platform, which can facilitate many financing initiatives and transactions due to its ability to keep records of the account holder’s transactions in an immutable ledger and provide an in-depth data source for which to run better algorithms to determine loan amounts, terms, and interest rates. Another great use for a Blockchain platform is in the automation of underwriting and loan distribution as it reduces time and labor costs, reduces operational risk, and provides governance and transparency across all banking functions. 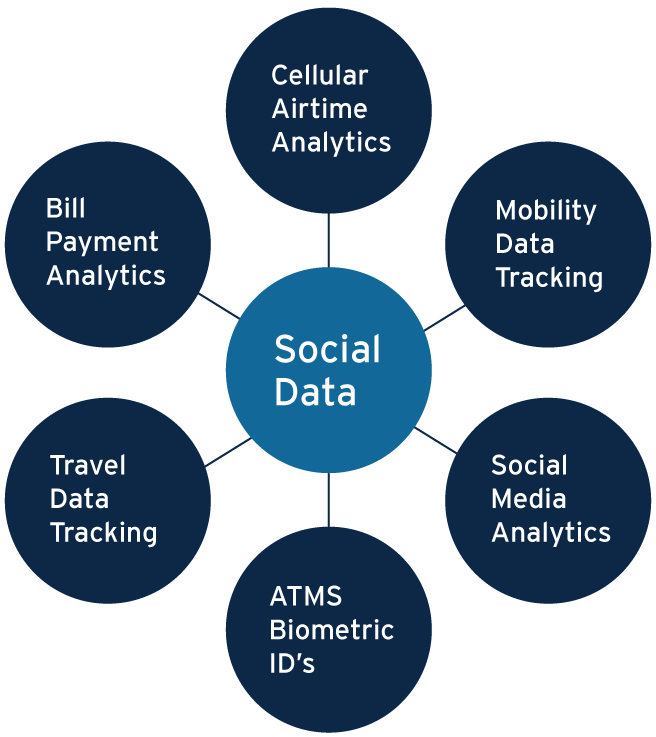 Employing advanced analytics that runs on top of a Blockchain platform would transform the way customer risk is assessed in terms of underwriting and issuance of credit. Rather than just relying on a FICO credit score, creditworthiness could be alternatively assessed by the use of social data and other nontraditional data. Airtime Analytics is a good example, as it records airtime purchase and usage rates to indicate a customer’s financial stability; e.g. a customer who tops up airtime at the same time each month indicates a stable income stream, while another who tops up in very small amounts on an ad-hoc basis indicates an unstable income stream. Also, rental/utility agreements could be used as an income indicator, as blockchain platforms can track payment habits, helping financial institutions issue credit to the consumer who exhibits positive payment history.

There are other ways for individuals experiencing exclusions from the traditional financial sector in the United States to receive loans, apart from banks. Rotating Savings and Credit Association (ROSCA) and Peer to Peer (P2P) lending options have erupted in popularity in the US since the 2008 financial crisis due to banks tightening restrictions on obtaining loans. A ROSCA is where a group of individuals agree to meet for a defined period in order to save and borrow together, a form of combined peer-to- peer banking and peer-to-peer lending. Both ROSCA’s and P2P lending options allow individuals to access pools of funds, otherwise out of reach, and are viable alternatives for those who are un(der)banked.

Through a Blockchain platform, the success rate and accessibility of a ROSCA could be significantly improved. A ROSCA program could be developed in association with an FDIC bank in order to build credit history for its participants, bridging the gap between the un(der)banked and traditional financing services. In the ROSCA-credit plan, an application platform would be developed using blockchain technology with an Artificial Intelligence (AI) data collection layer to give the bank insights into the participants’ risks. An FDIC insured bank would ensure the transactions as underwriter and would claim a percentage of the interest of the ROSCA as payment. Therefore, blockchain technology would reduce the participants’ risk of other participants abandoning the ROSCA, increasing the number of participants as well as increasing the benefits to the hosting financial institution.

There is no doubt that Blockchain is fundamentally changing the way the world is thinking about financial inclusion. Banking the un(der)banked, reducing the underground economy, and fostering greater access to credit will ultimately encourage economic stability and growth by allowing $1.9 trillion to be reinvested into the economy. Banks and Fintech companies who bet on the success of this emerging technology could potentially become big players in this arena to capitalize on the immense size of the underground economy and foster better lives for the un(der)banked population living in the US.

This article was produced in collaboration with Francois de Laigueand Justin Valentine at Dotted Square. Dotted Square has been working on a solution to inclusive finance for the un(der)banked and MBA students at Kogod School of Business provided market research support.