Baseball is often thought of as an intellectual's game. Historians and literary figures get misty-eyed when talking about the hypnotic power of America's pastime. Statheads devour copies of The Bill James Historical Baseball Abstract in their spare time. So AU Night at Nationals Park is a natural draw for the cerebral and passionate individuals who comprise the American University community. Students, alumni, faculty, and staff turned out in force on Friday, August 22 to watch the hometown Washington Nationals take on the San Francisco Giants.

This is the third season of the successful partnership between AU and the Washington Nationals. The AU WONK campaign is represented in signage on scoreboards throughout the stadium during home games. WONK trivia challenges appear during the season and tap into the expertise of AU faculty. Launched in 2010, the WONK campaign celebrates those same smart, focused, and engaged Eagles in attendance on Friday. 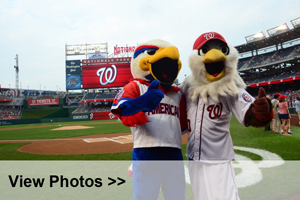 Plenty of AU students were at the game, and close to 400 tickets were set aside at a special discount rate for freshmen. Tickets were offered at three recent Welcome Week functions, and at one event, 180 tickets were sold in just an hour.

On Friday, students started off with a Nats-themed barbeque on campus, filled with popcorn and hot dogs. At the park beforehand, there was the highly anticipated special alumni picnic—sold out for the third year in a row. The first 25,000 fans at the stadium got free AU-Nats t-shirts. Accompanied by Nationals manager Matt Williams, AU President Neil Kerwin took part in the lineup card exchange with the umpire and the visiting Giants.

Sports journalist David Aldridge, an AU alumnus and Washington native, threw out the ceremonial first pitch. "My only goal was for it to be better than 50 Cent. I think I did that," he joked, in reference to the rapper's awful sideways pitch at a Mets game.

Aldridge (SOC /BA '87) felt gratitude towards his alma mater. "I'm so thrilled AU asked me to do this. It was a lot of fun," he said.

Singing the national anthem at a sporting event is extremely difficult. We've witnessed Grammy-winning artists completely bungle the song. But all-female, all-AU student a cappella group Treble in Paradise was up for the challenge. "We're like sisters in the group, and so it gets really comfortable. And we usually can just laugh through any of the nerves," said Hayley Travers, a senior musical theatre major. "I think a lot of the time what trips the person up is the lyrics. And for us, since we're all singing together, the chance that we're all going to mess up is narrowed."

They certainly didn't mess up, as their beautiful rendition brought about rapturous applause from AU and non-AU spectators alike.

Hannah Johnson, a junior psychology major and the singing group's president, had her entire family come down for the game. "Without AU, we would never have had this chance," she said.

Throughout the game, AU's presence was everywhere. Just before the third inning, a WONK trivia challenge featured Anita McBride, executive-in-residence at the Center for Congressional and Presidential Studies in the School of Public Affairs. Amidst the baseball, we could learn that President Abraham Lincoln was partial to the poetry of Walt Whitman.

On Twitter, students were encouraged to use #AUNatsNight throughout the evening to share their experiences and show their AU spirit. Clawed Z. Eagle energized the crowd, with first-year students flocking to get their pictures taken with the beloved AU mascot. And as anyone who's ever been to a Nats game can attest, the Presidents' Race is the moment of truth. Clawed was holding the finish line while George Washington was victorious.

Jennifer Vinciguerra, who just earned her master's degree in organization development, marveled at seeing the AU signs in sparkling colors on the scoreboards. "It's awesome. When we came in and it said AU everywhere, on all of the screens, it was very cool," she says. "And it's nice to come back and see other alums. It's good to realize, 'Oh, there's a community here."

Welcome Week Ends With a Bang

Much to the chagrin of the hometown crowd, Giants rookie Joe Panik had a monster game, going 4-for-5 and hitting his first major league home run. But it was an all-around banner night for other freshmen. First-year students said Night at Nationals Park instilled a sense of AU pride, while integrating them into their new city.

"Sports are a big part of any city. So now, after finally moving to D.C., this adds more attachment to being here," said Benjamin Zook, a freshman CLEG major in the School of Public Affairs.

And it's fun to watch a little baseball. Zook is from nearby Loudoun County, Virginia and he was already a Nats fan. There's a time-honored tradition of baseball facilitating father-son relationships, and you can set your DVR to Field of Dreams and The Natural for fictional inspirations of this. Zook and his father also bonded over the game. "Every time I come to a baseball game without him, he always watches on TV," he said.

Rebecca Malone is a freshman in the School of International Service and she's part of the three-year Global Scholars Program. "After Welcome Week, we thought this was kind of a good way to settle into the city," she says.

Katie Low happens to be a huge San Francisco Giants fan, but she relished live baseball in Washington. "Baseball is something I watch at home with my family. It's really cool that I'm watching it here with all of these AU kids. So it's like a second family over here," she said. "Tonight is awesome. And it really makes me feel like this is kind of my home now." Low hails from San Joaquin County, California and she's also a freshman in the CLEG program.

Freshman Samantha White, a political science major, is originally from the Cleveland metropolitan area. She's an Indians fan, but she's also adopted the Nats. "I definitely love baseball. And I'm really excited that being at American University we can get these discounted tickets," she said. "I'll probably be here all the time."

The Giants won 10-3, putting a halt to the Nationals remarkable 10-game winning streak. But AU kept its own streak alive. For the third straight year, AU celebrated its intelligent, jovial, tight-knit community through baseball. New, current, and former students had a good time. And the school may be recruiting a few future stars. While Clawed was heading towards the field before the game, a young boy in a Nationals jersey recognized the mascot. "That's American University!" he blurted out.