Wouldn’t it be fun to take your schoolwork and blow it up? For American University (AU) Game Design Master’s student, Cherisse Datu, that goal is more realistic than to most. For her capstone project Datu says she wants to release her work and school stress on screen, so no one gets hurt.

Don’t get Datu wrong, she is not angry, but she does have a lot on her plate. As she enters her final semester at AU's School of Communication (SOC), she is also working as a digital editor with a focus on interactives and user engagement at The Undefeated, a startup news site affiliated with ESPN. “I was brought in as a leap of faith – the game person. I had a lot to live up to. For me personally, as a worker, I like to be independent and trusted to do things."

Datu uses all of the communications skills she has learned at AU - in addition to her current game design work, she received her undergraduate degree in film at AU SOC - and professional experience, including reporting, video production, game design and overall content strategy, in her work at The Undefeated.

The Undefeated defines itself as a platform for understanding and exploring the intersections of race, culture and sports. They use original reporting, storytelling and commentary to think outside the box – to be unconventional. 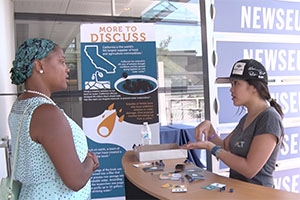 Datu presents a game on water conservation at a pop-up event outside the Newseum.

Games as Passion and Profession

Datu was raised on the U.S. territory of Guam, and says she gravitated towards video games at an early age. Her desire to be a storyteller, finding new ways for people to engage in media while offering honest and sincere content, has lead her on an interesting career trajectory.

Datu got her start at Al Jazeera Media Network. She worked on the launch of The Stream, which was a breakthrough program incorporating social media and news.

When Datu decided to pursue her Game Design degree at AU, she saw herself doing what she is doing now. "Games are also systems," she says, "and systems have been made for journalists for a long time, it’s a way to explore an issue. 'Game' is just not a serious word like 'data'" so it's been seen as less acceptable.

At the Undefeated, where Datu is a contributor, "We are open to a sort of experimentation, and where traditional organizations look at things as 'defeated,' when it comes to trying something new, we are undefeated. I sometimes have technical hurdles, but I can work with the constraints and just do it."

Datu hopes that her work will help destigmatize games and that people will begin to respect the field as they have come to depend on other concepts, such as data or research.

"I think of game developing as game storytelling. What is nice about The Undefeated, there is not backlash against games – like they are for children – its more they think interactives are cool and everyone likes them. I can think of a story – experiment with choose your own adventure in video format. It’s a low tech way to tell a story, using the technology we have."

Check out Datu's web site or her recent video and story for The Undefeated: "The Year of the 'Blerd': Cosplay Edition"