In 2017, the seventh annual State of Women-Owned Businesses Report estimated that, over the past 20 years, the number of women-owned businesses in the United States has grown 114%. The national growth rate for all businesses is 44%.

The report also estimates that there are now 11.6 million women-owned businesses in the US. These ventures employ nearly 9 million people and generate over $1.7 trillion, making them a notable source of income for the US economy.

According to Siri Terjesen, director of the American University Center for Innovation, this incredible amount of growth is due to a multitude of economic, political and social factors. "The barriers to accessing capital are much lower than in the past…and women are more likely to be able to attain financial resources at all venture stages," Terjesen says.

Terjesen also notes that women entrepreneurs' financial vitality and business growth strongly depends on their state of residence. Specific areas of the country-namely Texas, Florida, and Virginia-have more business-friendly regulations than others. Not surprisingly, the three fastest growing women-owned businesses, as identified by the Women President's Organization, are located in two out of three of these states.

Additionally, women are spending more time in the labor market annually, giving them the business skills they need to become entrepreneurs. And-as evidenced by programs like the American University entrepreneurship incubator-starting one's own venture is now a viable career option for women, when traditionally it was not. 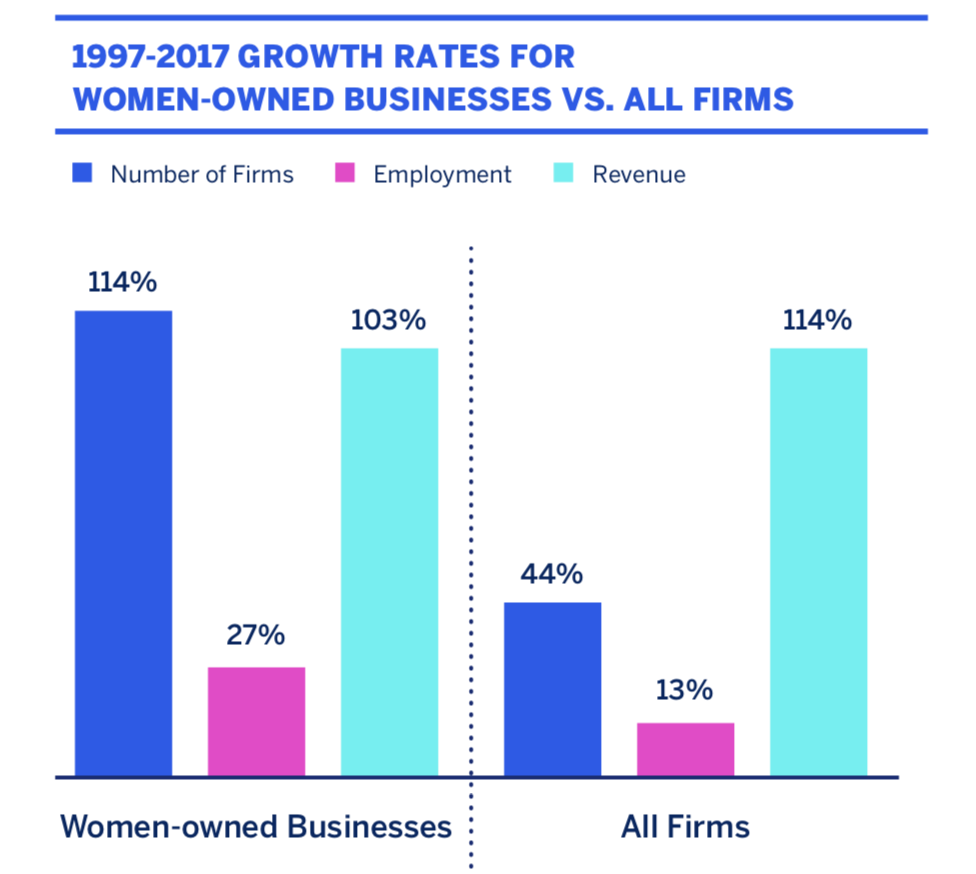 Excerpted from the 2017 State of Women-Owned Businesses Report

So, what's next for women entrepreneurs? And how do they ensure this upward mobility continues-for themselves, and for their businesses?

To find out-and to gain greater insight into the field as a whole, we sat down one-on-one with Terjesen, who serves as the dean's research fellow in entrepreneurship at American University's Kogod School of Business, in addition to her role as director of the Center for Innovation. Learn more from our conversation below.

Kogod School of Business: According to the State of Women Owned Business Report, over the past twenty years, women-owned businesses have grown 114% compared to the national growth rate of 44%. What, in your opinion, are some of the factors contributing to such significant growth?

Siri Terjesen: I think there's a lot of reasons. The barriers to accessing capital have dissipated over the years. There is also more awareness of public procurement programs for women entrepreneurs, so you see firms being led by women, at least in name, targeting those government opportunities.

There are also more women than men in our general population, and women are spending more and more time in the labor market. So, women are getting great business experience, and that means that there's more human capital available for start-ups.

KSB: What conditions are necessary for the proliferation of women-owned businesses to continue?

ST: In order to initiate successful women-led businesses, you need a pipeline of women in the private sector and in the labor market. I think it's really essential for women to go into the corporate sector and gain experience working with other entrepreneurs before starting their own ventures. This not only helps them develop the skills they need to be successful, but also often helps them access critical social and financial capital.

The government also needs to protect property rights. The government has to allow people to actually earn their rents, and not pay extremely high fees--for example, due to excessive regulation, as well as taxes.

KSB: What are some potential obstacles to growth?

ST: Government regulation is the number one. Women are more likely than men to start businesses in sectors that are highly regulated. These regulations often prevent women from being able to start and grow their businesses. We see this even in the incubator when students are starting companies in regulated sectors. They're spending a lot more time jumping through hoops before they can get things started.

A second barrier is acquiring meaningful prior experience in their chosen industry before they set out on their own. You're much more likely to be successful in a particular industry if you've previously worked in it and established the contacts and a base of knowledge.

And because so many of these high-growth businesses are technology-based, another top barrier is actually having a corridor to high technology for their business, such as knowing how to build block-chain based systems.

KSB: In 2017, the Women President's Organization identified the top three fastest-growing women-led businesses as Orangetheory Fitness in Boca Raton, FL; Pinnacle Group in Dallas, TX; and Technology Concepts Group International in Somerset, NJ. Are you familiar with any of these organizations?

ST: Not specifically, but I will say that it's not surprising they are located in those states, because these states tend to do more than others to protect their entrepreneur's economic freedom. They have some of the most business-friendly regulations.

It's also interesting the types of industry these businesses are in. Traditionally, women-owned businesses were in the retail industry; none of these three businesses are. It shows that women are branching out, and that they can certainly compete in multiple industries.

KSB: Is there any advice, based on your research, that you'd give these women running these businesses?

ST: Businesses today are so mobile. If you don't find if your success in a geographic location, then you can always relocate to a more business-friendly state or city! That's always something to keep in mind. And then building the labor pipeline: being able to attract and retain employees and grow them.

KSB: What implications does all of this have for public policy?

ST: I would argue for fewer regulations. Certainly there's a need for regulation of some sectors, but there's also a tendency to over-regulate. I also think there needs to be more follow-up on current policies. It's important to check if the regulation led to the desired effect--that almost never happens.

You also have to consider the part of the country you're in. Certain regions will be more focused on certain industries than others. The DC area is a big technology hub, so if you're looking there, you'd want to look into policies surrounding that particular industry.

And, of course, making sure there are policies in place that ensure women and men can access the money they need to start their businesses.

KSB: Finally, where do you see the future of women entrepreneurship headed?

ST: Traditionally we've seen more women starting businesses from age 35 and up. I think with the proliferation of entrepreneurship education in universities, and with new public and private programs that connect potential entrepreneurs to funding sources, we're going to see women starting businesses when they're a little younger. I also think we'll continue to see the proliferation of different sectors, so women won't just start businesses in retail as they have traditionally.

Dr. Siri Terjesen is Dean's Research Fellow in Entrepreneurship at American University's Kogod School of Business and Director of the AU Center for Innovation. Concurrently she is a Professor .2 at the Norwegian School of Economics. Siri received her undergraduate education at the University of Richmond (1997), her Masters at the Norwegian School of Economics and Business Administration in Bergen, Norway (2002) as a Fulbright Scholar, and PhD at Cranfield University in the UK (2006). She was a post-doctoral fellow at the Queensland University of Technology in Brisbane, Australia (2006-7). Her research on entrepreneurship, corporate governance, and strategy has been published in leading journals such as Academy of Management Review, Journal of Management, Journal of Operations Management, Business Ethics Quarterly, Journal of Business Ethics, Academy of Management Learning & Education, and Strategic Management Journal, and featured in leading media including Bloomberg, US News & World Report, the Times, Huffington Post, and CNBC. Read more about her background and experience here.