This is the first profile in an ongoing series that focuses on the AU 2030 project. American University has invested significant resources in key subject areas that cut across schools and departments. Kogod professor Sonya Grier has conducted research in two of those disciplines: health and urban/metropolitan studies.

As an associate professor of marketing in American University's Kogod School of Business, Sonya Grier has conducted pertinent, compelling research. She's looked at race in the marketplace, and the nexus between marketing activities and consumer health. Yet, as she points out, there's still so much consumer data—particularly related to minorities and obesity—waiting to be examined.

For instance, Grier co-authored a paper in a public health journal on the food shopping decisions of African-American females. But she says you'd be hard-pressed to find similar research in marketing. "I can't think of a study in marketing focused on black women," she says. This is surprising given that African-American women have high rates of obesity—an issue of growing national concern.

Grier says some academics are reluctant to incorporate race into their research, lest they be accused of having an agenda. "So that means that the research doesn't get done in a serious scholarly way," she adds. As Grier has discovered, it's imperative to understand the sociological aspects of health and eating.

In a scene on the TV show Mad Men, the character Pete wonders why a certain television brand is only selling in cities like Chicago, Kansas City, and Washington, D.C. His bohemian colleague then informs him that these are "great jazz cities." Pete considers the possibility that those televisions are popular with black consumers, and in a later episode he's reading Ebony magazine to understand the African-American marketplace.

And so it was in the 1960s, the time period that the show depicts. PepsiCo became an early innovator in targeting African-American consumers, and Grier has written about some of this history. Companies began hiring more nonwhite senior-level executives, and in recent years they've poured money into lobbying minority organizations like the Congressional Black Caucus, Grier says.

Target marketing is quite relevant today. "Food marketers view minority communities as attractive because they have higher growth rates, they have increased purchasing power, and they have a strong consumer orientation—which means that they like variety and they want to buy different products," Grier explains. And the minority youth population is growing much faster than the white youth population, she adds.

"Minority youth tend to be cultural trend-setters. So they tend to want the newest things, are early adopters of new technologies and then people tend to follow them," Grier says.

Grier notes that target marketing is not intrinsically negative. But she has researched the troubling aspects of this phenomenon. Fast food franchises and other high-calorie industries have targeted African-Americans and Latinos, groups at a higher risk than whites for obesity and type 2 diabetes.

Yet Grier found that proximity to a fast food restaurant can have a deleterious impact. In 2013, she co-authored a paper on this issue in the Journal of Public Policy & Marketing. "Students at low-income urban schools have almost a four times greater likelihood of being obese when they have a fast food restaurant nearby," says Grier.

The Ivory Tower and Beyond 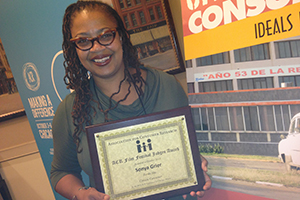 As a visiting scholar at the University of Havana, she made her first film about Cuban citizenship and consumerism, which won a Judges' Choice Award at the 2013 Association for Consumer Research Conference.

Grier's foray into film stems from her love of photography and the movies. During her first year teaching at AU, she met School of Communication professor Larry Engel and decided to sit in during some of his documentary film classes.

A Detroit native, Grier had a formative high school experience in the Leadership Education and Development Program for gifted minority students. She chose to earn her undergraduate degree at a LEAD school, Northwestern University in Illinois.

"I've always been interested in target marketing. I remember when I graduated, my adviser said, 'That's not a field of study.'" But upon taking her first job out of school at Kraft Inc., she was increasingly intrigued by the racial composition of consumer markets.

She eventually earned both her MBA and Ph.D. from Northwestern. She's been a visiting scholar at the Federal Trade Commission, and she was a health and society scholar through the Robert Wood Johnson Foundation at the University of Pennsylvania.

At one point, Grier weighed the benefits of staying in academia full time. "I was trying to figure out this notion of 'Do I spend time in the Ivory Tower, or do I spend time on practical concerns?'" Yet by grappling with pressing issues like obesity and marketing, she's found a way to do both.