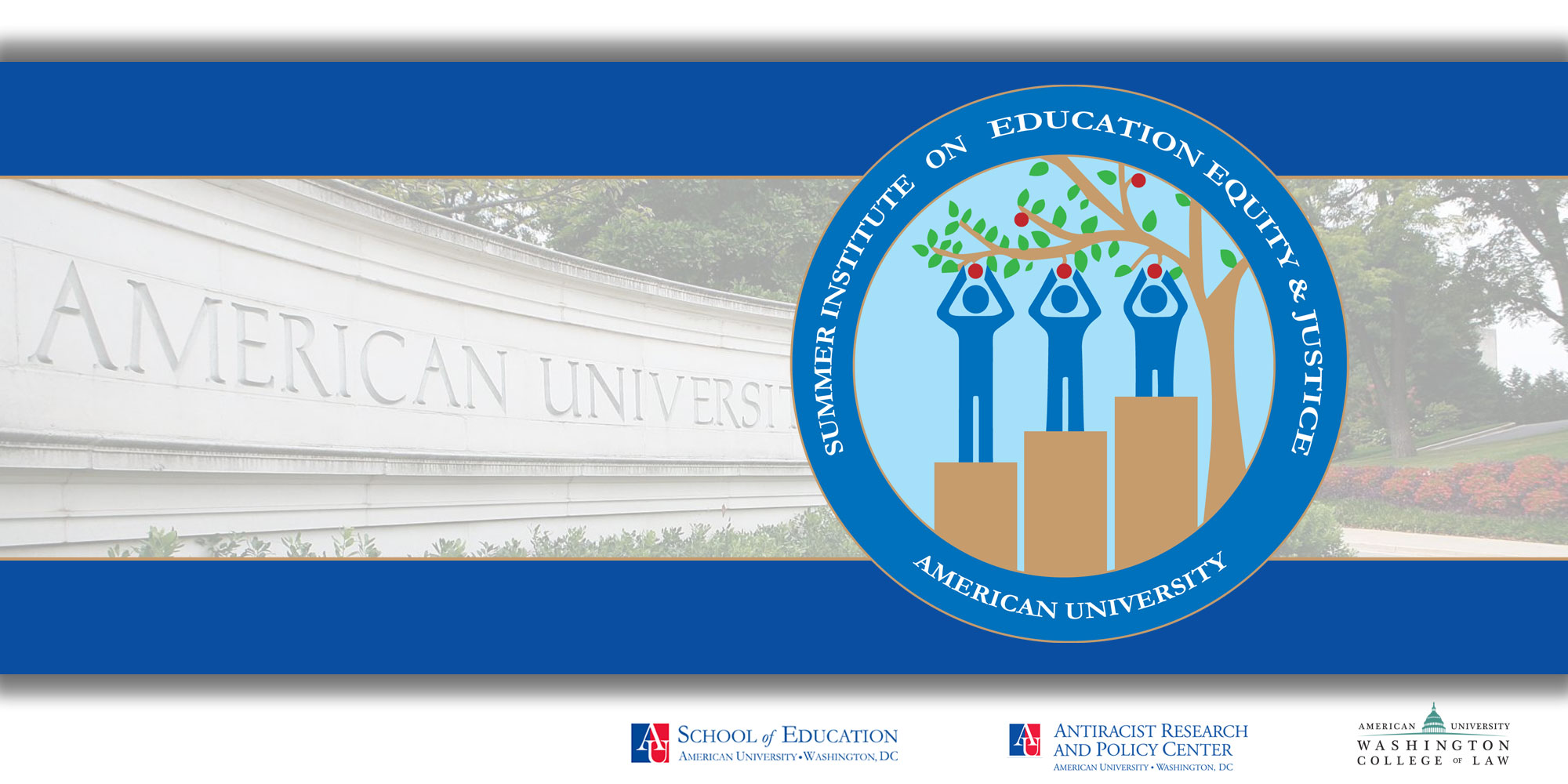 This year's theme is Leveling the Playing Field: Intersecting Race and Disabilities.

Sessions are designed to change both mindsets and practices. The overall goal of SIEEJ is to build a community of practice singularly focused on the strengths, challenges, and opportunities in the lives of young people of color and the communities in which they live.

We encourage you to engage with the sessions by using the hashtag #SIEEJthemoment.

Due to the virtual nature of this conference, certificates of participation will not be issued .

The 2020 SIEEJ Virtual Conference was held June 22-24, with three webinar sessions held each day. The 2020 theme was Uplifting Women and Girls of Color Through Antiracist Pedagogy, Practice, and Policies.

Please learn about our sessions and watch the recordings below.

Student Panel Discussion: The Lived Experiences of Women and Girls of Color
Cheryl Hewitt sits down with Lorraine Johnson, Ashley Sanchez-Viafara, Prachi Jhawar, and Veronica Pacheco to discuss young women and girls of color in the education pipeline.
https://youtu.be/tCSbxf-QzJg

Women & Mental Health in COVID-19
Drs. Day-Vines and Singh will discuss Mental Health of Women-of-Color during COVID: Through the Lens of Equity.
https://youtu.be/lRXP_jBtOJA

Mindfulness Break – The Stretch Room
Stretching is a great way to increase flexibility, improve range of motion, care for your muscles, release stress, and calm your mind. Simone L. Pollard will help us stretch together during this session and teach us how stretching can be a part of how You take care of You!

You can use a towel, a mat, or whatever you have as well as a stretch band, belt, or scarf to aid in getting you loose.

Book Discussion
Join us for our closing session, a Book Discussion with Dr. Ibram X. Kendi on “Stamped: Racism, Antiracism, and You: A Remix of the National Book Award-winning Stamped from the Beginning.”
https://youtu.be/cIG2uC0H6JI

Dr. Donna Y. Ford
Dr. Donna Y. Ford is a Distinguished Professor of Education and Human Ecology and Kirwan Institute Faculty Affiliate at The Ohio State University's College of Education and Human Ecology. She is in the Educational Studies Dept., Special Education Program. Professor Ford was formerly an endowed chair at Vanderbilt University in the College of Education.  Dr. Ford has been a Professor of Special Education at the Ohio State University, an Associate Professor of Educational Psychology at the University of Virginia, and an Assistant Professor at the University of Kentucky. Professor Ford conducts research primarily in gifted education and multicultural/urban education. Specifically, her work focuses on: (1) the achievement gap; (2) recruiting and retaining culturally different students in gifted education; (3) multicultural curriculum and instruction; (4) culturally competent teacher training and development; (5) African-American identity; and (6) African-American family involvement. She consults with school districts, and educational and legal organizations on such topics as gifted education under-representation and Advanced Placement, multicultural/urban education and counseling, and closing the achievement gap. Professor Ford has written over 300 articles and book chapters; she has made over 2,000 presentations at professional conferences and organizations, and in school districts.

Bonnie St. John
Bonnie knows a lot about achieving success against incredible odds. Despite having her right leg amputated at age five, she became the first African-American ever to win medals in Winter Olympic competition, taking home a silver and two bronze medals at the 1984 Winter Paralympics in Innsbruck, Austria. In recognition of this historic achievement, Bonnie was quoted on millions of Starbucks coffee cups and was honored by President George W. Bush at a White House celebration of Black History Month. More than an Olympic skier, Bonnie graduated with honors from Harvard, won a Rhodes Scholarship, earned numerous sales awards at IBM, and was appointed by President Bill Clinton as a director of the White House National Economic Council. President Obama named her to represent the US in delegations to both the Winter Paralympic Games in Vancouver and the Summer Paralympics in Rio. She holds several honorary doctorate degrees, and was recently lauded with her portrait in the main hall of Trinity College, Oxford, as a distinguished alumna. Bonnie St. John has been featured extensively in both national and international media including: The Today Show, GMA, CNN, CBS Morning News, NBC News, PBS, NPR, and The New York Times, as well as People, “O”, Forbes, Success, and Essence magazines, to name just a few. NBC Nightly News called Bonnie, “One of the five most inspiring women in America.”

Dr. Gloria Ladson-Billings
Dr. Gloria Ladson-Billings is the former Kellner Family Distinguished Professor of Urban Education in the Department of Curriculum and Instruction and faculty affiliate in the Department of Educational Policy Studies at the University of Wisconsin, Madison. Ladson-Billings is currently the President of the National Academy of Education. She was the 2005-2006 president of the American Educational Research Association (AERA). Ladson-Billings’ research examines the pedagogical practices of teachers who are successful with African American students. She also investigates Critical Race Theory applications to education. She is the author of the critically acclaimed books The Dreamkeepers: Successful Teachers of African American Children and Crossing Over to Canaan: The Journey of New Teachers in Diverse Classrooms, and numerous journal articles and book chapters. She is the former editor of the American Educational Research Journal and a member of several editorial boards. Her work has won numerous scholarly awards including the H.I. Romnes Faculty Fellowship, the NAEd/Spencer Postdoctoral Fellowship, and the Palmer O. Johnson outstanding research award. During the 2003-2004 academic year, she was a fellow at the Center for Advanced Study in the Behavioral Sciences at Stanford University. In fall of 2004, she received the George and Louise Spindler Award from the Council on Anthropology and Education for significant and ongoing contributions to the field of educational anthropology. She holds honorary degrees from Umeå University (Umeå Sweden), University of Massachusetts-Lowell, the University of Alicante (Alicante, Spain), the Erickson Institute (Chicago), and Morgan State University (Baltimore). She is a 2018 recipient of the AERA Distinguished Research Award, and she was elected to the American Academy of Arts & Sciences in 2018.

Dr. Shawn Anthony Robinson
Shawn Anthony Robinson, PhD, is a senior research associate in the Wisconsin's Equity and Inclusion Laboratory and instructional program manager in the Department of Rehabilitation Psychology and Special Education at the University of Wisconsin-Madison. Robinson’s scholarship focuses on the intersection of race, dyslexia, and giftedness (i.e., creativity and leadership), and how the misidentification of behavior/emotional disorders neglects the academic and social development of African American boys with an actual learning disability in Special Education. Robinson also brings a wealth of academic experience, training, and knowledge about the psychological development of dyslexia, which he learned as a graduate student and practitioner in the field. His undergraduate work was completed at the University of Wisconsin Oshkosh, his master’s at DePaul University, and his doctorate in language and literacy from Cardinal Stritch University. Robinson’s research stems from his lived experiences as an African American male who was in Special Education throughout his entire PreK-12 journey and graduated after his final two years in an alternative high school reading at an elementary level. Based on his personal academic journey and research interests, Robinson is a volunteer with Special Olympics, runs summer reading programs through the Boys and Girls Club, and serves on the board of directors of the International Dyslexia Association.

Dr. Christopher Emdin
Dr. Christopher Emdin is an Associate Professor in the Department of Mathematics, Science and Technology at Teachers College, Columbia University; where he also serves as Director of the Science Education program and Associate Director of the Institute for Urban and Minority Education. He is an alumni fellow at the Hutchins Center at Harvard University and served as STEAM Ambassador for the U.S. Department of State and Minorities in Energy Ambassador for the U.S. Department of Energy. Dr. Emdin is a social critic, public intellectual and science advocate whose commentary on issues of race, culture, inequality and education have appeared in dozens of influential periodicals including the New York Times, Wall Street Journal, and Washington Post.

Emdin holds a Ph.D in Urban Education with a concentration in Mathematics, Science, and Technology; Masters degrees in both Natural Sciences and Education Administration, and Bachelors degrees in Physical Anthropology, Biology, and Chemistry. He is the creator of the #HipHopEd social media movement, and a much sought-after public speaker on a number of topics that include hip-hop education, STEM education, politics, race, class, diversity, and youth empowerment. He is also an advisor to numerous international organizations, school districts, and schools. He is the author of the award winning book, Urban Science Education for the Hip-hop Generation and the New York Times bestseller For White Folks Who Teach In the Hood and the Rest of Ya’ll too.

The SIEEJ Planning Committees's key purpose is to coordinate the success of the SIEEJ Virtual Conference.

Please find below resources referenced during our sessions: