The Board of Trustees held their spring meeting on Thursday, May 18, and Friday, May 19, on AU’s new East Campus. Committee meetings were held on Thursday and the full meeting on Friday. A number of newsworthy items came from the two days, which I want to share with you.

A key item was the board’s full review and discussion of the racist hate crime that targeted members of Alpha Kappa Alpha Sorority, Incorporated, including our recently elected Student Government president. The status of the investigation by AU police, in conjunction with the United States Attorney for the District of Columbia and the FBI is ongoing. To protect the integrity of the investigation, additional details will not be forthcoming. The president and board are continuously updated on the investigation; we fully support President Kerwin’s commitment that the university will not rest until those responsible are identified and brought to justice.

The board strongly stated that it believes an attack on any member of the AU community is an attack on all of us; and while significant efforts have been made to create a truly diverse and inclusive campus community, there is much more to do to achieve our ideals. The board acknowledges that parts of our community do not feel supported. The board pledges to increase its own efforts to work with the AU leadership and campus community to address systemic racism in all of its forms and to strive to make AU a model campus for inclusion. The board unanimously approved a resolution to rededicate its efforts on this topic that is vitally important to our campus community and our future.

Neil Kerwin Steps Down May 31

This was the last Board of Trustees meeting with Neil Kerwin as president, as he steps down on May 31 after serving for 12 years (including two as interim and ten as permanent president). To honor his achievements of more than a decade as president, the board announced that he will become president emeritus upon the conclusion of his term this month. American University’s growth in standing and stature has been exceptional under President Kerwin’s leadership based on any number of measures—including academics, facilities, selectivity, research, faculty hiring, profile among national universities, and various other metrics.

At the board dinner on Thursday evening, we were proud to announce that more than one million dollars has been raised for the Kerwin Family Emergency Financial Aid Fund—first established by Neil and Ann Kerwin to help enrolled students whose financial circumstances have changed to address immediate financial hardships. Donors and friends provided gifts to the fund in honor of Neil’s leadership, with 100 percent of the board participating in this important effort.

Further, the board announced that the building currently housing the School of Public Affairs (Ward Circle Building), has been renamed Kerwin Hall in honor of Neil Kerwin’s more than four decades of service to American University—as president, provost, dean, alumnus, and student.

In other action, the board passed resolutions to thank outgoing trustees for their service, including Shyheim Snead as student trustee; Larry Engel as faculty trustee; and Gisela Huberman, who is leaving the board after 12 years as trustee.

The board approved the creation of four new degree programs: an MS in Agile Project Management, an online program in SPExS; an MS in Instructional Design and Learning Analytics, an online program in SPExS; a BA in Dance in the Department of Performing Arts/CAS; and a joint degree/BA in Global International Relations between AU SIS and Ritsumeikan University in Japan.

The plenary featured a presentation of a new mobile tour app—resulting from a collaboration between the Sony Corporation and American University. This pilot program is an innovative effort to help potential students and their families to not only learn about—but also to experience—AU via mobile device.

Following the public portion of the meeting, the board met in executive, then closed executive session. The next meeting will be the annual board retreat on September 14, at Airlie.

And on June 1, we welcome Sylvia Mathews Burwell to campus as she begins her tenure as AU’s 15th president. She attended the May 19 board meeting and has worked with the board, President Kerwin, and the cabinet over the past several months to provide an orderly transition.

Learn more about the council 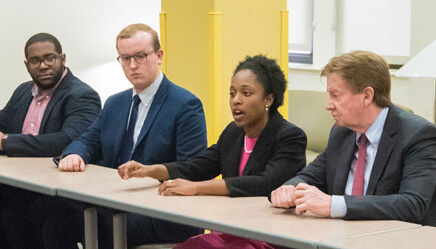 Information regarding AU's response to the hate crime on May 1, 2017.