Edwards earned her MFA in film and electronic media in 2015 at AU's School of Communication. In a wide-ranging discussion with University Communications and Marketing, she talked about Black Lightning, working in Los Angeles, and her time at AU. While at SOC, she honed her skills in Avid Media Composer, a video editing software system that she now uses on Black Lightning. This interview has been condensed and edited for clarity.

UCM: How did you land this job working on Black Lightning?

Edwards: Initially, prior to working with Black Lightning, I was with HBO as an assistant editor on the show Crashing . And when I moved to LA in 2016, I had been networking a ton. Just kind of joining different professional organizations that had peer-to-peer mentorship programs for editors. I was able to network with Joi McMillon, who was one of the editors on Moonlight. And she recommended my name for a number of different positions, and then she also recommended my name for CW. So when my time with HBO was coming to a close, I hopped over to CW for Black Lightning.

UCM: Visual effects are extremely important for a comic superhero show. Is it a challenge to recreate that comic book world imagery, but also convey realism?

Edwards: So as a comic book publication, Black Lightning had a limited run in the 1970s and the 2000s. And because it had such a limited run, we were in a great position to establish more rules for him. There's some challenges with that, but there's also some great opportunities. We can create different powers for him that weren't explored in the comic book issues. There's a nice vocabulary of different things he can do as a superhero and how we visually want to show that. But there's also some challenges with, "Is he going to be a Clark Kent type of superhero? Where he's in costume and no one recognizes who he is?" Some of those issues were addressed by the writers, but then there's also a lot of things that get addressed in visual effects. Quite often I work heavily with the writing team and ask them, "Well, what did you mean by this?" "When he sends a burst of energy from his hand, what do you want that to look like?"

UCM: What's been your favorite part of working on the show so far?

Edwards: It's really the integration between the story and Black Lightning as a superhero. I feel like story wasn't forsaken for this superhero show that has a bunch of visual effects. And I think that's what makes the visual effects more exciting and more fun. The effects actually have some reasoning and purpose behind them. It's not just to look cool.

UCM: It's been getting really positive reviews. Why do you think it's resonating with critics and audiences?

Edwards: I think Black Lightning presents a lot of different issues that haven't been presented in other shows. We can explore police brutality, we can explore the black middle class, we can explore education. I think given the political times that we're in, it seems very timely. We can talk about race and ethnicity in a way that can hit CW's younger audience, but also hit another demographic, too.

Edwards: I'm originally from Washington, DC. My undergraduate school was Dickinson College in Carlisle, Pennsylvania. And I graduated from undergrad in 2010, with a bachelor's degree in international business and management. My minor was in film studies.

Edwards: My initial interest came in high school. My mom bought me my first Samsung video camera, and I used to just film with my friends. It was more of a hobby, initially. And then when I got to Dickinson, I just started taking film classes there and really fell in love with it. I went through international business, and I found ways to merge my classes into a communications type of study. My first big media internship was with BET Networks in Washington, DC.

UCM: When was that? And what did you do for BET?

Edwards: That was just before I graduated college-the summer of 2009. I was an intern with them, and then I became a production assistant. My first production assistant position was with Bobby Jones Gospel show on BET. Later, I worked on this televised fashion show called Rip the Runway and the BET Honors. After college, I worked for NBC in New York in their affiliate marketing department. And later I got an associate producer and editor position with NBC4 Washington in Washington, DC. From there, I knew I wanted to go to grad school.

UCM: What kinds of skills did you develop at AU?

Edwards: What I got as a student was this well-rounded understanding of production, and this well-rounded understanding of filmmaking. There was screenwriting, audio, and sound. Personally, I was always drawn to the editing courses, because I knew that editing was going to be the lane that I wanted to be in. I took two Avid Media Composer courses, because I knew that if I wanted to move to Los Angeles, everyone said, "Make sure you know Avid." I liked the technical courses, but I really enjoyed how much AU made sure that you didn't sacrifice story for look. That you always make sure there's a reason and a purpose for why you have something, why it looks this way, and how it correlates with the story. 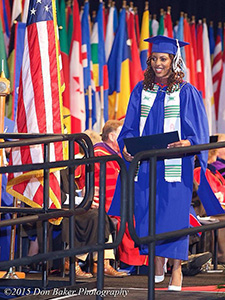 UCM: Who were some of the professors you learned from during your time at SOC?

Edwards: All of my advisers were extremely helpful. Russell Williams, Brigid Maher. I also worked with Tanya Roche-she was the one who taught the Avid courses. Brigid was my adviser for my graduate thesis film at American. She really pushed me to tell the stories that I wanted to tell and to try to make sure I get out of my thesis what I wanted.

UCM: You moved to LA in 2016. Is that something you'd recommend for other recent AU grads? I've heard that it's difficult going out to LA if you don't have steady work.

Edwards: What I recommend to other students is that you don't have to. I spent a chunk of time working in DC before I moved to LA. And I worked in television, which means that there are jobs in DC for TV. I worked for National Geographic Channel, the Smithsonian's National Zoo, and I also worked with Discovery Channel. So, I always tell students to really sit down and write out your goals. I learned that at AU from Chris Palmer. In one class, he had us write a mission statement of our lives, and it covered every area of life that you could ask about yourself. I just wrote down my goals, and I still use it to this day. It really helped me think that, "OK, if I want to do Los Angeles, let me take this time to develop my skills, but also let me save money." I moved to LA without a job. I had some interviews set up, but most of them were informational. I continued to network, and I think within a month of moving, I got my assistant editor position with World of Wonder Productions, which produces some Bravo network television shows. I worked on two shows, Million Dollar Listing Los Angeles and Real Estate Wars.

UCM: What were some other jobs you had in Hollywood?

Edwards: My biggest goal was I wanted to work in scripted television. People advised me that if you worked in reality TV, you really have to work hard to convince different producers or different post-production personnel that you can work in scripted TV. You want to make sure you're not pigeonholed. I got a lot of help from my mentor, [feature film editor] Brett Hedlund. And then I took a position underneath what I usually do, as a post-production assistant briefly for the Netflix show Bloodline. While I was there, I networked heavily with the editors. I had already been accepted into the Motion Picture Editors Guild union at the time. And my first union show was reality TV, which was Discovery Channel's Naked and Afraid. But it was very brief because then I got HBO right after that.

UCM: There's an ongoing conversation about sexism and race in Hollywood. Has it been hard to navigate a career there as a woman of color?

Edwards: I would say that there are definitely challenges, but they're not challenges that would keep me away from pursuing my goals. There are things that you become aware of when you are working with different studios and with different networks. We're in a very unique period where a lot of studios have been called out for not being very diverse. And I think there's some advantages for me to be working in Hollywood at this time, when studios are really taking a serious look at the diversity at the table. Quite often I've been the only African American, let alone the only African-American woman, working in editorial. That even happens in DC. So, it wasn't something that, coming to LA, would truly shock me. But I don't look at it as something that hinders me. Quite often I look at it as an advantage. More and more editors want to help bring diversity to the table.

UCM: Even though you've already worked on these episodes, do you still watch Black Lightning every Tuesday night?

Edwards: I watch more through The CW App, mainly because I do more streaming than I do actual televised channels. My normal work schedule is 10:00 a.m. to 9:00 p.m. It's very, very normal in this world to have a 10-hour day. When I talk to my family, sometimes they would turn their heads a little bit and say, "That's what time you have to work?"

UCM: I assume your family has been watching the show?

Edwards: Yeah! They've been very excited. They've been my own little PR team. They promote the show for everyone to watch. And every time I have a visitor come to Los Angeles, I always try to show them the studio and give them a little tour. Because it's a really great opportunity when you're on a studio lot, which is where I am, at the Burbank Studios lot right next to Warner Bros. Studios. There's so much activity here.

UCM: Has living in Los Angeles been everything you'd hoped?

Edwards: Oh, definitely. I couldn't have envisioned it going any better. It's been such an amazing journey and it's been so fun. Even the ups and downs of it. It's still fun. I love what I do, and that's what keeps me here and keeps me going. Because it's a city that slightly revolves around entertainment, it's great to just meet people and kind of have a support system. It's just been great to be in a city where I feel empowered. I think, "OK, I can do this. I got myself here. And I was able to do X, Y, and Z. And I'm ready for the next adventure."