The Women & Politics Institute provides practical and academic training to women that encourages them to become involved in the political process and facilitates research by faculty and students that enhances our understanding of the challenges and opportunities women face in the political arena.

To request an interview for a news story, call AU Communications at 202-885-5950 or submit a request.

As part of our “Women on Wednesdays” series, please join American University's Women & Politics Institute and the First Ladies Initiative for a virtual conversation with WPI Executive Director Betsy Fischer Martin and Washington Post political columnist, Karen Tumulty, author of the forthcoming book, The Triumph of Nancy Reagan, the “definitive biography of the fiercely vigilant and politically astute First Lady who shaped one of the most consequential presidencies of the 20th century.”

Publisher’s Weekly calls the book “a complex and engrossing portrait of one of the 20th century’s most quietly influential political figures.” Based on extensive interviews, overlooked archives, letters, memoirs, and White House records, Karen Tumulty covers the life of First Lady Nancy Reagan, the woman behind “the partnership that made the president.” From a traumatic childhood, to Hollywood, and on to the White House, Tumulty details the First Lady’s ability to finesse Washington power players to break into the world of politics through her husband’s ascendance to the presidency. Pre-order the book here
REGISTER ONLINE

New Research: She Votes: Women, the Workplace, and Pandemic Politics: The Covid-19 pandemic has upended women’s lives, highlighted inequities in health care, education and the economy, and underscored the importance of having women in political office.

Women Need to Run for Office Without Having to Run for Their Lives - A Personal Reflection on the Capitol Attack: Betsy Fischer Martin grapples with what the Capitol attack could mean for women in politics, and ultimately hopes "more women are emboldened to make a difference, to fight for equality and to stand up to dark forces."

Gender on the Ballot is tracking the Biden-Harris female cabinet-level nominations and senior level political appointees to the Executive Office of the President, as well as key leaders of Independent agencies, task forces and centers.

To learn more about many of the notable and historic women tapped by Biden, see our series of posts starting here.
VIEW THE TRACKER

April 21: Robin Bronk and Alysia Reiner discussed the historic role of women on television and their outlook on what the future holds for women’s representation on TV. Read more here and watch the full replay here

March 31: The Hon. Donna Shalala, Dr. Patrice Harris, and Laurie Rubiner discussed how women are playing major leadership roles in the fight to end the most deadly and debilitating preventable health threat to the nation – tobacco use. Read more here and watch the full replay here

March 17: Katie Connolly, Errin Haines, and Amanda Hunter presented the findings from our new Gender on the Ballot poll of female voters that explored "Women, the Workplace, and Pandemic Politics." Read more here and watch the full replay here

March 3: Gayle Tzemach Lemmon discussed her new book, The Daughters of Kobani: A Story of Rebellion, Courage, and Justice. She shared her on-the-ground reporting about an extraordinary group of women who took on the Islamic State and won. Read more here and watch the full replay here

February 3: Newly elected Rep. Kathy Manning (D-NC) and her daughter Jenny Kaplan, CEO of Wonder Media Network, discussed the historic role women of the House have played and shared their outlook on what the future holds for women elected to the 117th Congress. Read more and watch the full replay here

October 21: AU alum Julie Conway, Exec. Director of VIEW PAC and Rebecca Schuller, Advisor and Board Member of Winning for Women discussed their 2020 outlook and their efforts to support and elect GOP women. Read more and watch the full replay here

September 23: Former House Rep. Katie Hill (D-CA) discussed her book, She Will Rise: Becoming a Warrior in the Battle for True Equality, chronicling her experience with “misogyny and double standards." Read more and watch the full replay here

September 16: Kristin Kim Bart, Senior Dir. for Gender Equality at International Rescue Committee, discussed When Returning to Normal Doesn’t Work for Half the World’s Population and building back better. Read more and watch the replay here

September 9: Award-winning journalists Lynn Sherr and Ellen Goodman, co-hosts of the She Votes! Our Battle for the Ballot podcast, discussed the complex history of the women’s suffrage movement. Read more and watch the full replay here

August 26: Dr. Stacie Taranto and Dr. Leandra Zarnow, co-editors of Suffrage at 100: Women in American Politics Since 1920, discussed 100 years of women's engagement in politics. Read their Gender on the Ballot post here and watch the full replay here

August 5: Rep. Pramila Jayapal (D-WA), author of Use the Power You Have: A Brown Woman’s Guide to Politics and Political Change, reflected on her journey as an immigrant woman of color to the corridors of power. Read more and watch the full replay here

July 29: AU Alumna Jennifer Palmieri, former Communications Director for President Obama and author of, She Proclaims: Our Declaration of Independence from a Man's World, shared the key lessons she's learned from her journey to success. Read more Watch the full replay here

July 15: Former U.S. Ambassador to the U.N. and Governor of South Carolina Nikki Haley, author of the New York Times and USA Today bestseller, With All Due Respect: Defending America with Grit and Grace. Read more and watch the full replay here

June 24: Symone Sanders, Senior Advisor to the 2020 Biden For President Campaign and author of, No, You Shut Up: Speaking Truth to Power and Reclaiming America, in conversation with WPI's Betsy Fischer Martin. Read more and watch the full replay here

June 17: Sen. Joni Ernst (R-IA), author of the newly published memoir, Daughter of the Heartland: My Ode to the Country That Raised Me, in virtual conversation with WPI Executive Director Betsy Fischer Martin. Read more and watch the full replay here

June 10: Ambassador Capricia Marshall, former Chief of Protocol of the U.S. and author of the book, Protocol: The Power of Diplomacy and How to Make It Work for You. Read more and watch the full replay here

May 27: Cecilia Muñoz, author of the just-published book, More than Ready: Be Strong and Be You....and Other Lessons for Women of Color on the Rise, in conversation with WPI Executive Director Betsy Fischer Martin. Read more and watch the full replay here

May 20: Valerie Jarrett, senior advisor to President Barack Obama and author of the New York Times bestseller, Finding My Voice: When The Perfect Plan Crumbles, The Adventure Begins. Read more and watch the full replay here

Wed, May 12 at 6pm ET
The Triumph of Nancy Reagan
Karen Tumulty

WeLead expert speaker and @_GlobalWIN co-founder @helenmilby celebrates women in Congress who are leading from the middle and working across the aisle to create policy solutions and sustainable coalitions.https://t.co/ivcEA8yQxR

Check out the latest from @ongender on how the she-cession is weighing on women. For more on women, the economy, and pandemic politics, read the article here: https://t.co/Hmjgq5fkSD https://t.co/pFeiVVAJP6

#WPIWomenOnWednesdays: Join @AU_WPI and the First Ladies Initiative on WED May 12 @6pm for a virtual conversation w/@ktumulty of @washingtonpost, author of ”The Triumph of Nancy Reagan." Details and registration here - https://t.co/MZX6AzxGVa pic.twitter.com/kyWYtS30rt

Today is the first day of AAPI Heritage and Jewish Heritage month! We’ll be celebrating AAPI and Jewish sisters that pave the way for better representation in politics. Check out @ongender’s blog post about AAPI representation here: https://t.co/hlNyiqq7Kg ##AAPIHM #JAHM

With virtual graduation ceremonies happening across the nation, we honor former Rep. Patsy Mink, who represented Hawaii in Congress for over two decades and who authored Title IX, giving women across the country a path to equity in education! Congrats, Class of '21! #AAPIHM

As #MothersDay approaches, we’re reflecting on how moms are faring in 2021. Our latest @ongender polling with @au_wpi confirmed that the #pandemic has been particularly hard on mothers (as any mom already knows). Here's more: https://t.co/bCVnTiq62k 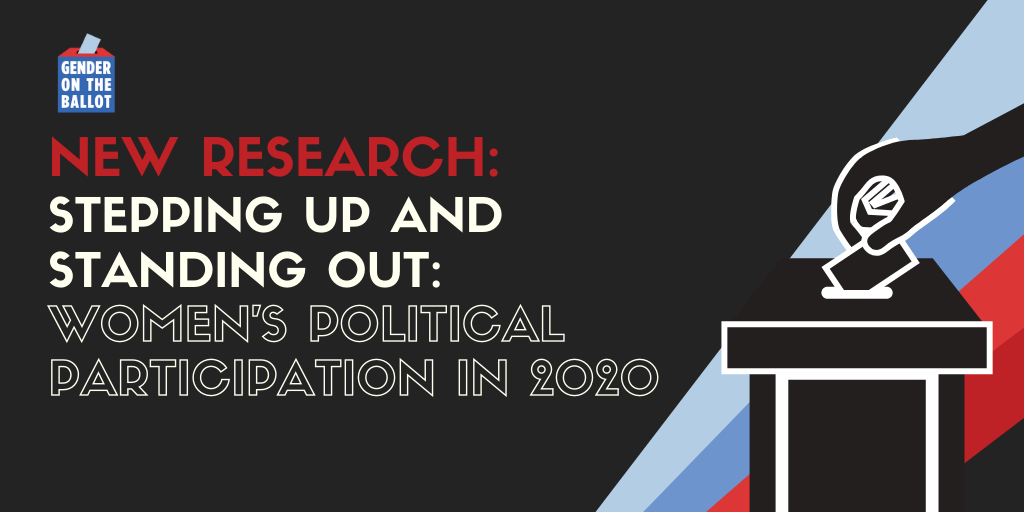 Our Gender on the Ballot research examines what motivates women and how they plan to participate this year. In case you missed it, you can watch the full panel here. Click to read the memo, the blog post, Axios coverage, and the press release.

Female ambassadors to the U.S. from Afghanistan, Iceland, Oman and Rwanda spoke on campus at a panel moderated by Betsy Fischer Martin, executive director of the American University School of Public Affairs’ Women and Politics March 4.
Full Story

A curated newsletter, delivered to inboxes on Saturday mornings, readers can catch up on a week’s worth of important new developments about women running for office, serving as leaders and engaging in the political arena.

Stay up-to-date on all the latest news + gender analysis in politics.

Sign up for the WPI Newsletter to view recent highlights and learn about upcoming opportunities and events.