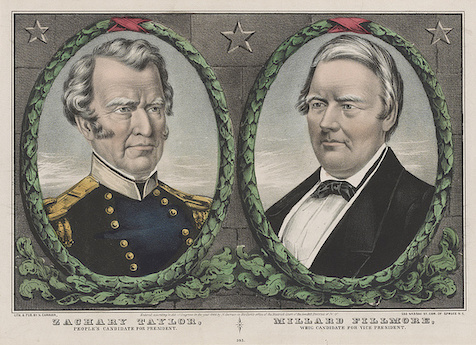 In 2020 the Center for Congressional and Presidential Studies launched the Correspondence of Zachary Taylor and Millard Fillmore. This project aims to locate and publish letters of the two men from 1844 to 1853, before and during their presidencies. It is led by two CCPS fellows: Editor and Research Professor of Government Michael David Cohen and Associate Editor Amy Larrabee Cotz. The edition they produce will enable scholars, teachers, students, and the public to learn about American life and the presidency before the Civil War from the words of the leaders and their diverse correspondents.

In the 1840s, Taylor commanded troops in Texas and Mexico while the United States annexed one and fought a war against the other. Fillmore helped shape the Whig party, the New York government, and the University of Buffalo. As presidents (1849–53), both worked to incorporate into the country new western lands won from Mexico and to find a compromise between supporters and opponents of African Americans’ enslavement. Taylor was the first president with no prior political experience; Fillmore was the last who was neither a Democrat nor a Republican.

The letters illuminate their political and prior careers, the social challenges of the day, and the many topics important to their diverse correspondents. Yet those letters largely are confined to archives and written in obscure handwriting. The editors, assisted by students in the School of Public Affairs and at St. Olaf College, are transcribing and annotating the most important of them—identifying people, events, and other topics—to render them easily accessible. They will be published in three print volumes by the University of Tennessee Press and digitally by the Rotunda imprint of the University of Virginia Press.

This project has been made possible by generous grants from the National Historical Publications and Records Commission; the Summerlee Foundation; the Watson-Brown Foundation; Delaplaine Foundation, Inc.; and the William G. Pomeroy Foundation.